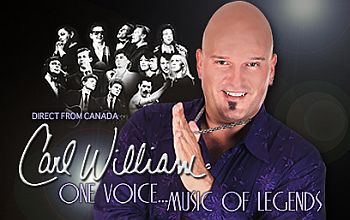 Carl William is playing inside the Wolf Theater at the Clarion Hotel. William is a Canadian singer that has sold over a quarter of a million albums in his own country, and he has come to Las Vegas with the hope of making it big. The show pays tribute some of the legends of the recording world, and he covers songs from the Everly Brothers, Roy Orbison, Tom Jones, Queen, Celine Dion, and others. In its current form, the show is akin to something that you would see from a good cover band in a lounge—without the ability to talk to your neighbor. Carl is very talented and has all the potential to be a headliner in Las Vegas, but still needs to break out and find a way to make this show something really special. The music for the show comes from a combination of karaoke tracks augmented by a trio of musicians. It is a bit odd...sometimes the musicians play with the tracks and sometimes they don't. And just the idea of having musicians play along with a karaoke track is odd...it gives you all the sound of live music without the dynamics of live music. The other thing about the music is, well, the only way to put it is that it is obnoxiously loud. The people that are going to be drawn to this show are going to be an older crowd...the same crowd that really doesn't like loud music...talk about alienating your base of support... I overheard a couple that was leaving the theater, and the man said to his wife, "That would be a good show if the music wasn't so loud." ...sort of summed it all up. William's first album "Les Enchaînés" topped the charts for 20 weeks, was certified Gold in Toronto and nominated for "Pop Album of the Year". Carl's career continued with a 2nd successful solo album, several duet albums with his now, ex-wife Chantal Pary; two hit videos, and many sold out tours throughout Canada. The singer has an amazing four octave vocal range. A couple of things are missing from Carl's performance. Every singer that has really made it in Vegas has not only had a great talent, but also an incredible charisma and connection with the audience. That ability to get people on your side and really root for you is probably even more important than the brilliance of your voice---especially in a live show setting. This is where Carl needs a little work---connecting with the audience. He is, in fact, a nice guy, but his interaction with the audience is stilted, and he misses the opportunities to really talk to them. An additional problem is that he has a large computer monitor set up at the front of the stage with the lyrics for the songs (I'm not sure if he actually needs the monitor for the lyrics, but I understand why he would want it there.) The problem is that it creates yet another barrier between him and the audience...and the front row is staring straight at the back of a monitor. It only seems to heighten the separation between the performer and the audience. William is a talented singer, and I believe that he could do well in this town...just turn down the music and talk to us.