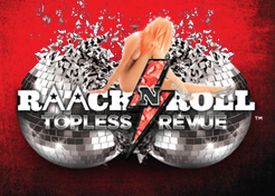 Raack N Roll is playing inside the showroom at the D Hotel and Casino in downtown Las Vegas. This is a fun, topless dance revue, and it is set to classic rock music. The dancers are beautiful and talented, and the music is great classic rock and roll. It is a small show, on a small stage, with a small budget; but they have done a tremendous amount to make the most of it.

Originally staged at Hooters, this show has made somewhat of a lateral move to the D. The stage is no bigger, the lights and sound are no better, and the location has the same pluses and minuses. For the most part, the show doesn't make any bones about what it is supposed to be about...this show is about sexy, topless, dancing women. They ply their trade to rock and roll music, and we have a good time.

The dancers are great both as an ensemble and individually. Their talent shines through, and they make stale choreography work.

The expectation of dancing and choreography has changed in the last ten years...especially with the advent of shows like, "So You Think You Can Dance." We simple expect more from the dancing and dancers. Most of the choreography in this show looks old. It looks as if they remounted and reused numbers from past shows without trying to reinterpret it for a new production. It is obvious that they didn't have much of a budget, but coming up with great dances would have been worth the money. It is only because of the talent of the dancers that these numbers work at all, but the choreography certainly keeps this from being a great show.

The other challenge that this production fights with throughout the show is the space itself. This stage was not made for dancing--that is obvious. The dancers are so cramped that the audience worries that they’re going to run into each other. The ceiling is so low that it looks as if they can’t even extend their arms. And the "aerial" acts (with a swing and a rope) are almost laughable as the dancer’s head brushes the ceiling as she swings.

There are some very good moments in the show. "Hollywood Whore" was certainly the best and most original number presented.

Robert Nash serves as both the host and the interim act for the show in order to give the dancers a bit of a break. I must say, Nash is a great Robert De Niro impersonator...probably the best De Niro impersonator that I've seen. However...his other impersonations don't fare as well. Some of them are even a bit painful to watch. Overall, though, he did a pretty good job-- -especially considering that most of the male dominated audience doesn't want him there. They are there to see the women, and a male impersonator is not the type of break in the production that they want. It is a tough job.

Is it a great show? No. Is it a good time? Yes. Could it be better? Absolutely.

As the show continues, I hope that the producers will take some time to upgrade the choreography. The show needs it, and the dancers deserve it.