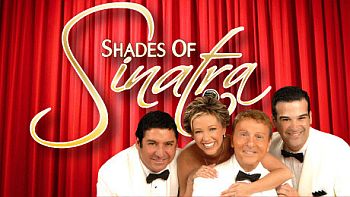 "Shades of Sinatra" is playing inside the Wolf Theatre, just off the Strip at the Clarion Hotel. This show is a tribute to the songs of Frank Sinatra performed by a quartet of performers. In a short time, they are able to cover a broad spectrum of the singer's greatest hits. The show pays tribute to most of the signature Sinatra tunes one would expect, as well as several that may be new to casual fans.

In many ways, I look at this production as a, "no-brainer"...meaning that this show is simple, complete, and almost impossible not to like. All of the cast members are good singers. They are fun and pleasant to watch, and the music is timeless. There is really nothing displeasing about this show.

The cast is made up of three men and one woman. All of them are working professionals and all have other gigs that they work around. Carmine Mandia, Larry Liso, Lisa Smith, and Ryan Baker are the regular cast members. Each of them brings their own personality to the stage and creates a nice interplay between the other characters. There are understudies for each of these main people, and all of the understudies do an equally nice job.

I have to put in a disclaimer here...
I have been working on the show since it opened at the Wolf Theatre. So my review is not that of a disinterested party. My review will be bias since I work on the show. However, my work on the show has given me a keen insight to the production. I watch the show almost every night, and I also watch the audience almost every night. I enjoy seeing the people's faces as they recognize the songs and how it takes them back to the first time they heard it. I love watching the audience as they sing along with their favorites.

If this was a show that I did not believe in, I wouldn’t be working on it.

Additionally, I see the tremendous potential that this show has. It could easily be booked in a bigger room. The possibilities for tours, corporate gigs, and cruise ships are endless...this is a show that will eventually become much bigger than itself.

Right now, it is a small show in a small venue. It is a unique experience that, (I suspect,) will not be around for a long time. I do expect to see this show grow by leaps and bounds.