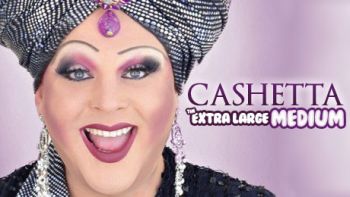 Cashetta, the Extra Large Medium is playing inside the Wolf Theatre at the Clarion Hotel. Cashetta is a female impersonator psychic, and creates an interesting production that first looks with comedic eyes on the world of psychics, and later seems to turn into an actual psychic show with a more serious side to it. Cashetta doesn’t try to convince anyone to believe in or not believe in psychics, but rather lets the audience decide on their own based the accuracy of her insights. The intuitive visions that are related make many of the audience members think twice about their doubts. Scott Weston created Cashetta many years ago and has done stand-up, an illusion show, and has now gotten into the realm of psychics. Developing the psychic powers, along with knowledge of the tarot and numerology is something that Scott has worked on most of his life. Putting these skills into a show is a fairly recent venture, but the success of the effort seems almost inevitable. Cashetta is a large gregarious woman that is absolutely hilarious. She can make almost anything funny and amusing. Her timing is impeccable, and her wit is matchless. I have to put in a disclaimer here... I have been working on the show since it opened at the Wolf Theatre. So my review is not that of a disinterested party. My review will be bias for a couple of reasons. One, I work on the show. Two, I have gotten to know Scott (as well as Cashetta) both onstage and off, and I think that he (and she) is both a terrific person and performer. My work on the show has, however, given me a keen insight to the production. I watch the show almost every night, and every night I also watch the audience. It is so interesting to watch people as Cashetta answers questions from the audience. They usually go from being amused to being stunned...it is delightful. The show is separated into two fairly distinct parts. The first half of the show is all about entertainment and laughs. This part of the show is all about getting the audience comfortable with Cashetta. What the audience finds is that, even though Cashetta is a large personality that there is nothing to fear or shrink away from. Cashetta is very kind to her audience and never embarrasses or ridicules. (Ok, understand...when Scott is in full Cashetta regalia, she stands about 6’ 8” tall and has a personality that is very imposing and cannot be ignored. The people she seems to scare the most are big straight men.) The second half of the show is all about readings. Audience members fill out cards and ask questions before the show, and during the reading portion, Cashetta answers the questions. The results are interesting every night. Cashetta offers private readings after the show for those that want to know more. Cashetta (aka Scott) does a really good job.