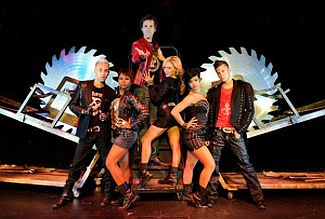 "Illusions," starring master illusionist Jan Rouven, is now playing inside the Starbright Showroom at the Riviera Hotel & Casino. Rouven has just celebrated a year in Las Vegas, and in that short time, he has established himself as one of the top magicians in town. Rouven came to Vegas from Germany---where he was a bonafide headliner and a star throughout Europe. Las Vegas is a different beast, and he spent the bulk of his first year just trying to get everyone to notice him. In the short time that he has been here, he has done a lot to garner that notice. He is making audiences smile and other magicians nervous. Everything that he has done he has done well. The show is still fairly formulaic in its execution, and combination of illusions, dancers, contemporary music, lights, and fun; but the formula works (that's why it became a formula.) It only works, however, if it is done well...and Rouven does it very well. Most of his illusions have a sense of danger to them, and they are often billed as "death defying," (which I always found a little amusing...because let’s face it, just how many times can you defy death...especially with a nightly show.) But nonetheless, the illusions give us a thrill. Most of the tricks are variations of things that we've seen before, but as long as they are done well, then they are still good and viable illusions. The best trick, (and one I've never seen before,) is the "Bed of Death." Numerous swords are suspended over a bed upon which Rouven lays and a volunteer releases the swords one by one doing their best to avoid skewering our star. The anxiety of the audience is palpable.   Rouven has been mesmerizing audiences all over the world with his illusions, and caught the attention of Germany's Pop-star, Michelle, who decided he would become her opening act.  Never before had an illusionist opened for a singer and just like his act, Rouven broke boundaries, touring more than 35 cities to sold-out crowds. Soon after, he began performing his own longstanding show at Europe's biggest revue-theatre, the legendary Royal Palace in Alsace, France.  The show became known as "The Man with Nine Lives." Rouven has been honored with some of the most important international awards of the entertainment industry such as the "Magician of the Year," "Audience Award Monte Carlo Magic Stars" presented by Princess Stephanie of Monaco; and "Entertainer of the Year" which is selected by more than 37,000 members of the biggest magic society worldwide.   During the past 10 years of his career, Rouven has performed to audiences of up to 20,000 people, more than three million spectators have seen him live and approximately 55 million people have been able to view his many TV appearances.   The move to the Riviera was a good one for Rouven. It gives him a lot better exposure to the Strip and solidifies him as a presence in Las Vegas. "Illusions" is one of the best and most viable new shows in town. The illusions are executed well, and the star of the show is charming with a lot of charisma. He has a great group of dancers that also function as his assistants. They are very talented. Beyond the stage, Jan Rouven is really a nice guy both personable and approachable. He is hard working and humble in his approach to the show, and if he continues to improve the show as he has in this first year, then he will truly be a force with which to reckon.