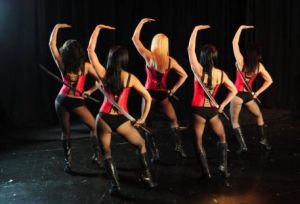 "The Viper Vixens" are playing inside the small showroom at O'Shea's. This is a topless dance show that features women with weapons...it's a great concept brought forth by Ottavio Gesmundo and company. For the most part this show works. The "Kill Bill" style of introduction along with the talents of this company makes for a fun evening. This show is still in its infancy and needs a lot more stage time to become a seasoned and viable competitor in the Las Vegas market. Most of the problems with pacing and dynamics will work themselves out with time. The crucial elements of concept and talent have been accomplished. The show seems to have a little bit of everything: dancing, singing, excitement, and fun. Each of the performers have taken the name of a different type of snake...hence, the "viper" part of the vixens; each has been given specific attributes of the different type of snake and then do their best to embody these things in their performance. Each of the performers work with a variety of weapons (some more adeptly then others) and oftentimes, the weapons are used just as a transitional means to get to a skill or style in which they truly excel. As much as I like the women with weapons concept, there were times when the ensemble was performing what looked like a martial arts form...forms are great for practice and discipline, but they are not so exciting to watch. One of the highlights of the evening was seeing the crossbow act by Mr. & Mrs. G...the act is dynamic, fun, and dangerous. It also has a lot of humorous elements, which truly helped round out the evening. The showroom at O'Shea's is a bit primitive...old seats, small stage, basic lighting. It is hopefully a transitional space for this production because this show would do so much better in a space that offered good lighting and a better stage to showcase the talents of these people...but I understand the problems with finding a decent space in this town---cost and availability are tough things to negotiate, and casinos just don't buy and support entertainment like they used to. This show suffers from the same problems that almost all of the new small shows suffer from...one person trying to do everything. Ottavio is a great person and a suitable centerpiece for this show. He is also producer, writer, director, etc...and that's the problem. I continue to preach this in so many of the reviews I write...when one person becomes the "jack of all trades," then they are the master of none. The show needs that outside perspective to oversee the pacing, dynamics, and overall structure of the piece. All of the basic elements and concepts are in place, and yet, the show is missing something. I enjoyed the show...it is hard not to like---topless dancing women with weapons. There has to be a market for this. The show will continue to get better as it progresses. I wish them well.