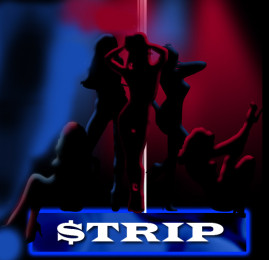 "$trip: The Play" is showing at the Aruba Hotel on Las Vegas Blvd in the area between the Strip and Downtown. The play is about a fictional Las Vegas Strip club called "The Sunset Lounge." Buck, the owner, has been murdered and now there's a crime to solve. That's when, Amanda Cole, a file clerk with Las Vegas Metro Police, goes undercover as "America" the Stripper. The play is written, produced, and directed by George Damian...at least we know who to blame...

Simply...this show is bad. It is really bad. It is so bad that it is almost good...but for all the wrong reasons. I hate seeing shows like this...I want every show I see to be great. I love going to shows, and I always want to have a good time...but then there are shows like this. The literature says that this show is based on true stories...which I find hard to believe. The literature says that this show had a successful run in Los Angeles...which I find really hard to believe. The show is not unredeemable, but it needs a lot of work.

The first glaring problem is that George Damian tried to do it all. It is hard enough to write a play. It is difficult to produce a play, and it is challenging to direct a play. Doing any one of these jobs is tough enough in and of itself. Trying to do all three of these jobs is usually a recipe for failure. When one splits their focus in this manner, they usually do a bad or mediocre job at all of them.

The script of this play focuses on surface elements. None of the characters are very well developed, and they are all stereotyped characters. The script has elements of prejudice and racism in it, and by the time we get to the disclosure of the murderer, we just don't care.

A lot of the problems of the script might have been averted if there had been a good director. The actors could have avoided playing the stereotypes. They could have instilled some depth in the characters. The other thing that a director would have provided is interesting staging and pacing to the show. A director could have coordinated technical elements...George! Bring someone else in to stage your vision!

As I said previously, the show is not unredeemable, and there are two ways to go about saving this production. If this is a serious piece of theatre, then seriously create this show. Do the rewriting. Get someone to produce, and get someone to direct.
Or...
Embrace the badness of this show and go completely campy. Create the spoof of itself...the show is halfway there as it is.

Now I must say that the pole dancing elements of the show were great. Good job, dancers.

My favorite part was when the sound of the gunshot was played a full two seconds after the actor had been "shot."

I cannot recommend this show until it is reworked.