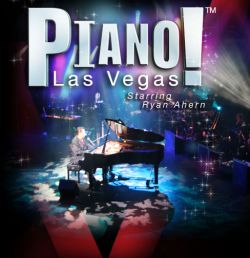 Piano! Las Vegas; is playing inside the V Theater at Planet Hollywood. The show stars Ryan Ahern, an international recording artist and world-champion pianist. Playing music genres from Broadway to Rock n' Roll to Boogie Woogie, Ahern entertains audiences with his diverse arrangements and mesmerizing hand speed. Ahern grew up in Las Vegas and has often dreamed of having a show on the Strip.

Ahern is backed by six of Las Vegas' finest musicians who entertain audiences with exciting and lush arrangements. From contemporary medleys such as Maroon Five's This Love and Seal's Kiss From a Rose, to favorite hits including Ray Charles' Mess Around, Jerry Lee Lewis' Great Balls of Fire and Queen's Bohemian Rhapsody to timeless movie themes from John Williams' Theme from E.T. to Bette Midlers' Wind Beneath My Wings and the exciting classics Malagueña and Flight of the Bumblebee Boogie all topped off with Ryan's own award-winning Boogie Woogie. Ahern presents a masterful showcase of piano technique and artistry.

Ahern is a great pianist. He is backed by some terrific musicians, and he plays a good variety= of music...so what is the problem? The problem is twofold. First is the problem with the connective tissue...all of that stuff between the songs. Ahern comes off as a really nice guy, but the showmanship and the set up between the music seems to drag the production down. The music is fancy and Liberace-like...and the patter between the music is just that of a regular guy. The show needs to be more than just the music. He needs to spend a bit more time and effort on the set up, explanations, and possibly his own background. We need to be entertained during the patter as well as when he is playing his music.

The second problem is the music itself...yes, it is fancy, and oftentimes brilliant, but because everything is played with the same types of runs and flourishes, after a while it starts to all sound the same. Ahern is missing a lot of the dynamics that the music itself has to offer. After a while I really wanted to hear just one piece played as it was written. The simplicity of a well written piece of music is the reason so much of it became brilliant. The music didn't become great because it was played with such extravagance. It became great because of the music itself. He would do himself a favor by incorporating some of this.

Piano! Las Vegas is an enjoyable show. Ahern does play the piano wonderfully...and backed by the other musicians, it is a joy to which to listen. The show would benefit from more showmanship and a greater variety of playing styles. It is, however, certainly worth ones time and effort to go see this show. Ahern is also a good advocate of Las Vegas. He is always out in the community doing what he can to benefit others in need. It is an admirable trait, and I'd like to see him succeed with his show.