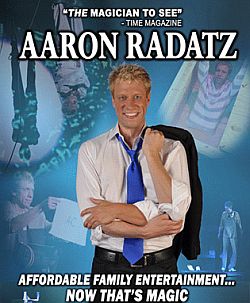 Aaron Radatz is performing in the showroom at the Clarion Hotel and Casino. He is a magician with tremendous credits, good promotional material, and a history that would make you think that he is truly the prodigal son of magic. Sadly, none of these qualities actually appear on stage. Even though I was sitting just off center in the audience, I could still see and watch the mechanisms of his tricks work. It was typical of the careless approach to the presentation of the show.

From the earliest moments of his professional life, Radatz attracted global clients who were leaders in their industry including: Ameritech, Bally's Casino, Holland America Cruise Line, Hilton Hotels, General Motors, Volvo, Busch Gardens, Disney Cruise Lines, Terrible’s Casino and the famed Hollywood’s Magic Castle. He was the youngest magician to headline a casino production at Casino Magic Biloxi, MS. He was the only magician to have apprenticed with the great Harry Blackstone (Jr.). He is also the only magician who has been commissioned by the U.S. Pentagon for a command performance for the U.S. military.

These are huge credits...but those credits did not translate to magic on the stage. If you watch his promotional video prior to going into the showroom, you would think that you were in for a blockbuster afternoon, but what you see in the video in not what you see onstage.

The props and sets look as if they were put together my amateurs. The tricks are commonplace and mediocre...for example; his finale is a straight jacket escape (ignore for a moment that there are probably five straight jacket escapes on any given night on stages in Las Vegas.) He gives us a tremendous build up to the escape and talks of breaking Harry Houdini’s record (ignore for a moment that probably most of the magicians in town have broken this record.) He is hung over the stage and proceeds with the escape, with the gratuitous foot slip toward the end...its fine. The problem is that too many other people are doing the same thing higher, slicker, and faster.

And therein lies the problem...just about everything that he does, someone else does a lot better. Sadly, it ranks him in the lower portion of the mediocre pool. Las Vegas has too strong a pool of magicians for anyone to come in that is not at a top level.

I will say that he does seem to have a great rapport with children. He is really good with them. He fascinates them, amazes them, and entertains him. If I needed a magician for a kids party, he is the first person that I would call.

His show and his presentation need a lot of work.