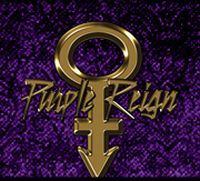 Note: Now Playing at the Westgate Las Vegas
Purple Reign is playing inside the Night Owl Showroom at Hooters Casino Hotel. Jason Tenner, who plays Prince does a great job in his role. The music and sound of the band are great, and they put on a terrific show. You really have to be a Prince fan to truly enjoy the show. There are a lot of "inside" things that left me a bit baffled at times...when these things were explained to me later, it all made sense, but to really get the experience, brush up on your Prince trivia.

This energetic show had the audience going crazy when they heard songs like "Purple Rain" and "When Doves Cry". The audience was leaving feeling like they have taken the plunge into Lake Minnetonka as this show pays tribute to groundbreaking artist Prince and his performance in the movie "Purple Rain". This year marks the 26th anniversary of this classic 80's movie. You can expect to see the likeness of "The Kid" along with Morris Day and The Time during this 90 minute show.

This band first started playing in small college clubs at the University of Nevada in Las Vegas. They quickly developed a large following local following. Since those humble beginnings, Purple Reign has risen to international acclaim and is known as the world's number one Prince Tribute show. On November 17, 2008, the group became the first ever tribute/impersonator act to appear as the musical guest on "The Late Show with David Letterman". This show was later chosen by CBS and The Late Show to ring in the New Year and re-aired January 1st, 2009; making it the first musical performance of 2009 on Letterman. Purple Reign has been crowned "Best Tribute Act of 2009" by the 28th annual Las Vegas Review Journal Poll; winning 2 awards by both the staff and readers. Purple Reign has received accolades from the likes of Paul Shaffer and the CBS orchestra who said that they were "UNBELIEVABLE! FABULOUS!". Alicia Jacobs, former Miss USA and Las Vegas NBC entertainment news reporter, hails Purple Reign as "the best tribute band in Las Vegas".

All of the band members were great, and I especially liked the dancer. This is a complete show that moves quickly from one thing to the next.

As I said previously, it helps to be a Prince fan.