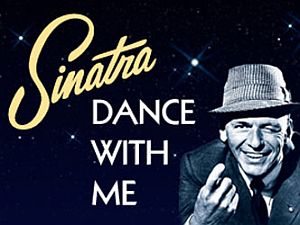 "Sinatra: Dance with Me" is playing in the showroom at the Wynn Las Vegas. It is conceived, choreographed and directed by Twyla Tharp; endorsed by the Sinatra family, and brought to Vegas by Steve Wynn. The premiere of this romantic dance spectacular celebrates and honors Frank Sinatra's 95th birthday on December 12. Using the vocals of Frank Sinatra and backed by a 17-piece big band, Twyla Tharp creates electrifying, mesmerizing, and exciting movement and dance as she follows four couples as they fall in and out of love at a swinging nightclub. It is esoteric, artsy, funny...and brilliant. It has reminded me how powerful and wonderful dance can be. The cast is outstanding and unbelievable. This is the picture of what dancing should be and can achieve. This is the dancing that every dancer hopes for and dreams to do. It is so far beyond anything else in this city right now. It is the culture that we Las Vegans have been aching for. It was one of those evenings at the theatre that reminded me why I got into the arts so many years ago. As you listen to the music, as you watch the dancing; there is a visceral and emotional response to what you are witnessing. The theatre is more powerful than any other medium out there because it unfolds and is experienced as life itself. The vocals of Frank Sinatra are beautifully incorporated into the production. Taken from the original recorded masters, the show's score combines classic vocal performances from the Sinatra catalog and archives along with signature Sinatra arrangements (Nelson Riddle, Billy May, Quincy Jones) and some brand new orchestrations for this innovative spectacle. "Sinatra: Dance with Me" is the next and most elaborate chapter in one of the most exciting collaborations in contemporary dance. Twyla Tharp's creative relationship with the music of Frank Sinatra began in 1976 with the premiere of Once More Frank, a duet created for the American Ballet Theatre and performed by Tharp and Mikhail Baryshnikov. The collaboration continued with Nine Sinatra Songs, Tharp's acclaimed piece for 14 dancers, and was followed by Sinatra Suite, featuring Baryshnikov. Tharp's production Come Fly Away played in New York City earlier this year and was described by Time Magazine to be "the purest jolt of pleasure to be found on a Broadway stage!" Twyla Tharp has choreographed more than 135 dances and five Hollywood movies; directed and/or choreographed four Broadway shows; written three books; and received one Tony Award, two Emmy Awards, 19 honorary doctorates, the Vietnam Veterans of America President's Award, the 2004 National Medal of the Arts, the 2008 Jerome Robbins Prize, and a 2008 Kennedy Center Honor. She is a member of the American Academy of Arts and Sciences and an Honorary Member of the American Academy of Arts and Letters. In 1965, she founded her dance company, Twyla Tharp Dance and has choreographed for many other companies including American Ballet Theatre, The Paris Opera Ballet, The Royal Ballet, New York City Ballet, The Boston Ballet, Hubbard Street Dance and The Martha Graham Dance Company. In film, Tharp has collaborated with director Milos Forman on Hair in 1978, Ragtime in 1980 and Amadeus in 1984; Taylor Hackford on White Nights in 1985; and James Brooks on I'll Do Anything in 1994. In 1992, Tharp wrote her autobiography Push Comes To Shove. Her second book, The Creative Habit: Learn it and Use it for Life, was published in October, 2003, and she recently released The Collaborative Habit: Life Lessons for Working Together. Today Tharp continues to create and to lecture around the world. She is a true American icon. This show is only going to be in town for a couple of months, but is a "must see" for so many people...Sinatra fans and anyone that is, was, or wants to be a dancer. It is truly brilliant.