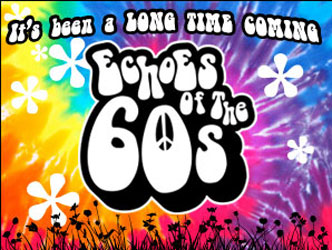 "Echoes of the '60s" is playing in V2 Theatre inside the Miracle Mile Shops at Planet Hollywood. This is a musical tour of the sixties with a bit of narration between the songs in order to frame its place in history. It is an unforgettable era, from which, most of us have some very distinct memories. All of the songs would be on just about everyone's greatest hit list. Both the musicians and the music are great.

Most of the band members were a part of the Danny Gans show. It obviously is an opportunity for them to once again pool their talents and show off their skills. Each member of the band is both accomplished and versatile, and while the music was great, the show seems to lack a personal connection with the audience.

We needed something more... The narration is fine in isolated spots, but doesn't go anywhere in the overall scope of the show. The only progression we see is chronological...and we want more. Bill DeLoach is not the best narrator either...he often slurs or mumbles his words...to the point that I didn't understand the name of anyone else on the stage. I wanted to mention the other people in the review, but I couldn't catch their names...I asked the person next to me, and time and time again, she said that she didn't understand either. I got his name because someone else introduced him.

The costumes need work... Not only were the costumes unflattering, but they were stereotypical in their execution. I felt badly for the female singer in the opening sequences...there are certainly other style choices that would have worked far better.

The lighting left a lot to be desired... In almost every number, there were chucks of the stage that were left in the dark. Even worse was when there was decent lighting and the performer would step out of it. Perhaps these musicians have been the in background for so long that they didn't want to be on the part of the stage where the light hurt their eyes...on more than one occasion I watched a performer move from good light into bad.

It feels odd to pick apart a show that I enjoyed. It was good to hear all of the music. The musicians truly are a talented group of people, and the music choices were great, (except that I really wanted to hear some Rolling Stones, but that wasn't included.)

"Echoes of the '60s" will be a good show for you, depending on what you want. If you are going to the show for the music, then this is a great show to see. If you want more to your production than just listening to a good cover band, then this show is going to leave you a bit disappointed.