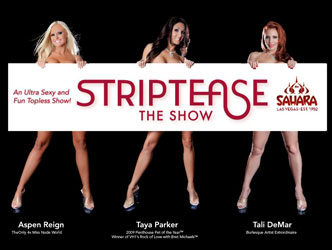 Striptease is playing in the big showroom at the Sahara Hotel and Casino. It is a topless dance show with a variety of acts and burlesque numbers with several notable headliners from the industry. It is a show that seems to be doing everything right...talented people, good choreography, nice concept, etc., and yet the show seems to be flailing and failing at every turn. The biggest enemy to this production is the stage and space itself. It doesn't seem to matter how talented each person in the cast is. None of the people and none of the scenery seem to fill the space. And when a number is completed, the performers seem to be stranded in the middle of the vast emptiness of the stage...the pace of the show suffers as the people make, what seems to be, an interminably long exit across the stage. The numbers also suffer from bad scenery placement. All of the scenery is set back so far on the stage that one feels as if they need binoculars to see what is going on...either that, or the performer has to make these loooong crosses from the scenery to the front of the stage. It becomes a show about watching people navigate their way across the stage rather than connecting with the audience and moving the pace along. Every one of the dancers is accomplished. They handle a variety of dance styles very capably, and they perform the erotic and sexy moves very well. Everything they do could work if they were repositioned. The jail scene, the shower scene...all great things, but so far upstage that we lack the connection with the performer and the impact of the number...and unfortunately, when they chose to bring audience members on stage, it was not handled well. Taya Parker is the host of the show. She was the 2009 Penthouse Pet of the Year and has also gained notoriety by being the winner of VH1's, Rock of Love. She is a surprisingly good host. She is well spoken and has a lot of charisma to accompany her looks. I wish that is where her duties had ended, but instead, they also had her do a dance number...she was choreographed to run and dance amongst a forest of hanging silk material...again, because of the size of the stage, the poor thing looked at is she was exhausted midway through the number...it became more about running across the stage rather than dancing. Aspen Reign, the only four time winner of Miss Nude World, lends her sex appeal to the show. Though she looks horribly awkward as a dancer, she does do a nice number posing and writhing in a small pool of water. The only problem with the number was that it was too far upstage and lacked a connection with the audience. Additionally, both of these women had the oddest boob jobs I'd ever seen. My favorite number of the show was performed by Tali De'Mar, a true burlesque artist. She had all the right moves and all the right things to make her number stand out. Once again, however, her sofa was way upstage, and she wanted to be dancing to the audience way downstage. Her trips back and forth from the furniture took a lot away from her piece. The last featured dancer is Jenny Romas...talented in every way. Choreographer, Enrique Lugo does a great job with these women. He is one of my favorite choreographers in the city. Striptease frustrated me...and not in a good way. This show would absolutely work in a smaller space where a stronger connection between the performer and the audience could be achieved. I think that they should at least try and cut down the size of the stage with curtains or lights. The show lacks the intimacy it really requires.