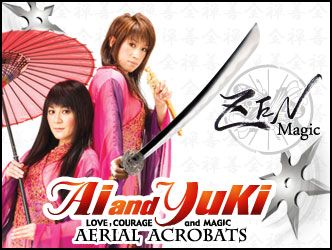 "Zen Magic" is an afternoon show that is playing in the Saxe Theater in the Miracle Mile Shops at Planet Hollywood. Japan's "first ladies of illusion," Ai and YuKi, take us on a journey where magic meets mysticism and where good battles evil. The promotional material states:

Ai and YuKi are the only thing that stands between good and evil and they'll do anything to fight off the evil of the Tengu. Tengu are a class of supernatural creatures found in Japanese folklore, art, theater and literature and are one of the best known monster-spirits. As legend has it, over time Tengu became creatures associated with war and eventually they were given the knowledge of skilled combat. And Zen Magic brings Ai and YuKi live to the David Saxe Theater to defend the audience and defeat the evil Tengu with their incredible martial arts skills.

From that description, the show sounds really cool. The production also has highly-skilled aerial acrobats and martial artists...that eventually steal the show. I found this a difficult show to enjoy. Parts of it were beautiful, parts were stunning, and parts were thrilling, but overall...the magic was standard fare, the pace was slow, and the story was convoluted and inaccessible. Perhaps it is partly a cultural thing...perhaps this is a well-known story in the eastern part of the world, and perhaps is makes perfect sense to those from that culture. I was bored, and the production seemed to drag along. It also doesn't help that I've seen every illusion that they performed on numerous occasions. The magic tricks that are done are the common illusions that are featured in almost every magic show in town. Ai and YuKi, "The First Ladies of Illusion" both hail from Japan where for many years have thrilled Japanese audiences with their own brand of classic traditional magic. They have been invited to perform at the world famous Magic Castle six times in both 2007 and 2008. They were nominated in the category for "Stage Magic" at the Magic Castle Awards. That same year they produced their first American venture at the San Gabriel Theater in Los Angeles, CA. They were featured for three episodes on the "Masters of Illusions" television show on FOX in 2009. The best part about the show was the acrobatics and martial arts elements. The production hired people from one of our great local circus troupes...and as usual, they were flawless. This is where the audience became engaged as they saw small performances of straps, lyra, silks, and Russian Bar. They performers didn't mean to overshadow the magicians, but the skill, the technique, and the "wow" factor are all on a completely different level. The production has many positive elements...a good group of dancers and acrobats. The staging is well done and a lot of beautiful stage pictures have been created. The two stars of the show have charisma and are adept at all of the elements. The production is bogged down, though, by the dreadfully slow pace, the convoluted story, and the run-of-the-mill magic.