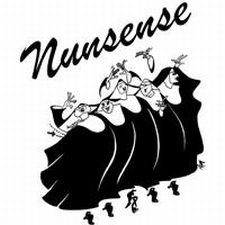 "Nunsense" is playing inside the Shimmer Cabaret at the Las Vegas Hilton. The premise of the story is that after a tragic vichyssoise incident that left most of the nuns at the convent dead, in order to bury the few remaining bodies, the other nuns have to put on a benefit to raise money. Silly as this may sound; "Nunsense" has played successfully for decades---both Off-Broadway and in community theatres throughout the country. It is a modern classic among small musical comedies. It is a proven piece of material, and I have never seen a boring or bad production of it...until now.

I was so utterly disappointed in this production. How can you ruin a production of "Nunsense?" It seemed as if it was one of those no-brainer shows that no matter who produced it, it would still be fun and amusing. When I saw it Off-Broadway, the show was great. When I saw various community theatre productions of it, it was still a lot of fun. When I saw it done by rank amateurs in a recognized bad community theatre, it was still amusing...and this production...I was looking forward to this production. There is a strong cast of good performers. I've seen most of these people perform before, and I know that they are good. I know the material, and I know that it is good. How could this show be ruined? Well, the answer is that the show was ruined by the director.

"Nunsense" is the second longest running show in Off-Broadway history. When it came out in 1985, it won awards for Best Musical, Best Book, and Best Music. It has been translated into 26 languages. It has spawned eight sequels. "Nunsense" is not just a play; it is an entire empire. It is solidly proven material.

The cast is made up from some of the best female actresses and singers in Las Vegas. It is a veritable Who's Who of Vegas' female performers.

So why did I watch what looked like a couple dozen audience members walk out?

It's the director's fault. The director ruined the show. The choices, the interpretation, the pace, the wit, the relationships, the dynamics, the look, the business, the staging, the blocking, etc...are all part of the director's job, and all areas in which this director failed. Even the basics of how to tell a joke seem to have been lost...if it had been one or two performers that botched jokes, I would have blamed the performers. Instead, all of the performers threw away all their laughs in the same way...why?...because they were following direction. This director also did the choreography, which lacked imagination and was completely forgettable. The show was boring, and even painful to watch at some points.

The pace was flat and even...it literally reminded me of the flatline of a heart monitor.

Bad choices were made in the adaptation of the script. It seemed as if the script was cut down almost randomly...subplots were started and then were left hanging. Good songs were cut out and inferior songs were left in...and they completely missed the big picture of the script, i.e. telling the story as it progressed from point A to point B.

I realize that this review is filled with the questions, what were they thinking? Why? How? It is disbelief. It is utter disbelief that a good show with a good cast can be produced and directed so badly as to completely ruin this show. I left the theatre shaking my head.

I do appreciate the cast. They are all good, strong performers. Michelle Johnson, Janien Valentine, Diane Ellis, Robin Berry Vincent, and Kathryn Arianoff are great singers, each have an abundance of charisma, and are all strong and committed actresses. Natalie Carson and Kelly Clinton-Holmes did not perform on this evening.

The show was directed and choreographed by Nancy Gregory.

I actually hope that they close the show down, find a competent director, and completely redo it. Both the material and the performers deserve better. I hardly ever say this because I usually find something redeeming, but for now, this is a show that you can miss.