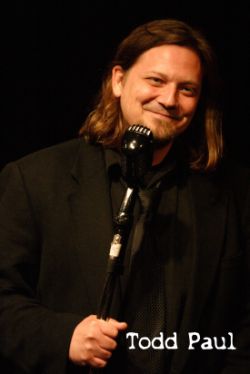 "Fear and Laughing in Las Vegas," starring Todd Paul, is playing in the upstairs showroom at Hooters Hotel and Casino. Todd Paul's show includes juggling, magic, humor, music, and a variety of other, well...stupid human tricks...and it is delightful. The best thing about Paul is his personality and charm. He immediately puts the audience at ease and allows us to simply have a good time.

Todd Paul began performing on the streets and stages of Northern California at the tender age of 13. At 21, he became a bartender and would amaze patrons by flipping bottles and making their money float in mid-air. While working at a very popular nightspot in Jackson California, he started hosting a weekly comedy show produced by good friend Catfish Stevens. Taking the talents he already had, he began to write comedy bits utilizing the props he'd already mastered. For the next several years, he worked on his act performing where ever he could. When no one would hire him he would produce his own shows and sell tickets himself. Soon his shows were selling out in all the local theaters and news traveled fast that this kid was getting good. By 1998, Todd Paul was a full time entertainer, working mostly corporate events and comedy one nighters, when he met the legendary comic Kip Addotta. Kip gave Todd Paul his break into Las Vegas and the bigger comedy clubs. Starting as an opening act, his next time out would find him in the middle spot. On only his third booking in Las Vegas, Todd Paul jumped from unknown to headliner in comedy clubs across the country.

"Fear and Laughing in Las Vegas" is a bit of an odd show, in that it has the feel of a street performer that has put together enough material to have a show...which in many ways is exactly what it is. The thing about a good street performer is that they have to be able to engage an audience immediately and then work hard enough to sustain them and keep them there. It has to be one of the toughest exercises that a performer can have. Expectations for a street performer are generally not high, and so they don't get the respect of a performer on stage. The street performer has to work twice as hard to get the same sort of praise.

In this show, we get the sense that Todd Paul was a very good and very hard working street performer and has somehow achieved the dream that every street performer would have...a show of their own...

Todd Paul engages us immediately, sustains us, keeps us amused, and has enough variety that makes us want to stay and see what is next. I don't say this often, but the time seemed to fly by. The show felt as if it was just beginning...and suddenly an hour had gone by.

Todd Paul is a consummate performer, and he is a nice person as well. He also takes part in "The Dirty Joke Show" which immediately follows his show. "Fear and Laughing in Las Vegas" is a truly unexpected surprise. The upstairs showroom at Hooters is just a converted banquet space and has the feel of a temporary set up, but Paul is certainly able to overcome the shortcomings of the space. It is a fun show.