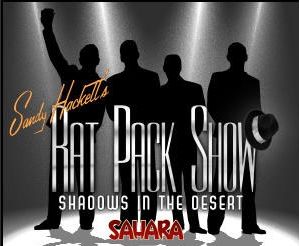 Sandy Hackett's Rat Pack Show -Shadows in the Desert, is playing inside the main showroom at the Sahara Hotel and Casino. It is the story of the Rat Pack that is sent down from Heaven to perform once again-the famous "Rat Pack"--Frank Sinatra, Dean Martin, Sammy Davis Jr., and Joey Bishop appear on the Sahara stage...upon which they never performed. The show (backed by a live orchestra) is filled with songs, comedy and nostalgia. The entertainers are certainly not "look-alikes" to these famous people. In this instance, though, I think that this is a good thing because it seems as if the production went for talent rather than looks--oftentimes a novelty. I certainly appreciate this choice by the production team. These are talented performers, and each of them shows us the style and characteristics of their charge, and while they may each lack "the look and sound," they more than make up for it in their talent, and we in the audience do not fail to see each of the people that these performers represent. The Sammy is especially talented, and I certainly appreciated all of his skills. The exchanges and interplay between each of these performers is wonderful. They seem to play off of each other very well. All of the dialogue and quips that they exchange back and forth certainly sounds spontaneous rather than rehearsed. One of the especially nice and interesting things about this show is that while they are recreating a lounge act of the past, the performers freely acknowledge the present--as if the characters are somehow omniscience as well. The show starts out with "Joey" coming out and warming up the audience with a few jokes. Even though these are old jokes for the most part, the timing of this performer makes them seem fresh. From there we are introduced to "Frank," "Dean," and "Sammy." The rest of the evening is spent listening to the music that made these performers famous. A lot of the audience members seemed to revel in remembering when they saw the real Rat Pack, and were thrilled that they could finally see them again. Several other things make this a complete evening. First of all, there is a live orchestra. Taped music has almost become the norm in this town, but it is not an adequate substitute for real musicians. The dynamics of a performance are so often lost with taped music. Each performance is unique, and if a performance is going to be inspired, it needs the flexibility of a live orchestra. There are, of course, the oddities of the production...when did Joey Bishop become the star of the Rat Pack? I suppose that it is easy when you are the producer, as well. It just felt very odd. The other part that seemed to fall by the wayside was the concept...after they appeared, the concept disappeared. Finally, there is the fact that you watch all of the performers drink and smoke on stage. In these times of anti-smoking and anti-drinking, we are reminded of the time when drinking and smoking were much more socially acceptable. It is almost a shock to see a lit cigarette on stage. Sandy Hackett's Rat Pack Show -Shadows in the Desert is an enjoyable show, and you don't have to be part of that generation to enjoy it. These are simply talented performers.