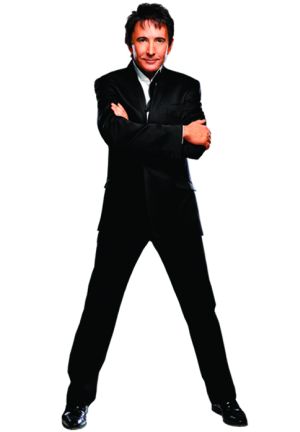 Greg London's, "Icons," is playing at the Mardi Gras showroom inside the Riviera Hotel & Casino. Greg is an impersonator that does a full array of voices, is back by a four-piece band, and is supported by a trio of dancers. The show has great technical support and is a pretty show to watch and a lot of fun to which to listen. Greg comes to the Riviera after a successful two and a half year run in Sammy's Showroom at Harrah's Reno. While in Reno, he received many accolades and awards including Best Show and Best Entertainer. He now hopes that success will translate to Southern Nevada. The best thing about the show is Greg's energy and charisma-no matter what character voice he is doing; he is doing it with enthusiasm. The sheer joy of his performance translates beautifully to the audience. Another great thing is the band...there is nothing like having musicians behind you...and the dancers are also a great asset. As with all impersonator shows, there are good and bad choices with regard to the people chosen to imitate, and there must be some impersonator rulebook in existence, somewhere that I don't know about, that requires impersonators to do Louis Armstrong, Kermit the Frog, Sammy Davis Jr., Elvis, Ray Charles, Julio Iglesias & Willie Nelson, Neil Diamond, Johnny Cash, etc.-which of course, are the same impressions that I am absolutely sick of...and if you do these, you had better do them well...because, well, everyone does the exact same thing. Sadly, some of these standards don't even impress me any longer...my daughter can do a good Elvis and Louis Armstrong. I want a new and unique impersonator show. With regard to the stereotypical ruts that impersonators fall into, Greg London lands squarely in the middle of them. Literally half of the show is made up of material that we've already seen. I appreciate when London breaks free of this worn out material-even when there is a varying degree of success. I liked the Ozzy Osbourne (even though it went on too long.) I loved the Don McLean and "American Pie," and while there is not much to the impression, I have not seen a better devise to get the audience involved. Greg London is very talented, and in fact, I really wanted to see more of him. When he sang as himself it was great. I loved when he played his own musical instruments. It almost seemed as if he could do his own show and accent it with a couple of impressions, rather than the other way around. The banter with his bass player was not set up well and often seems to come out of the blue. The mix on the music was a bit odd...there is a great guitar player that no one could hear...lots of oddities with this show that need to be worked out. "Icons" is entertaining, but in the world of impersonator shows, it is just average. What is not average is the talent of Greg London...he is exceptional, and I wish that more time was spent developing him.