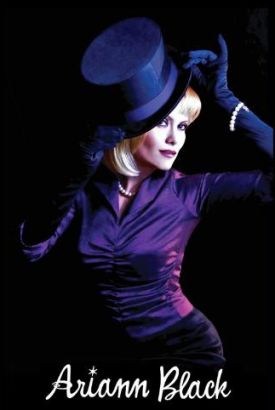 "Secrets," a family oriented magic show, is playing in the showroom at the Westin Hotel. It is an all-female magic show that stars Arian Black. Arian is supported by a trio of dancer/assistants that entertain us throughout the evening. The production is very well done for the small space, and is very entertaining. There are not a lot of female magicians out there, and even fewer with the skills of Arian Black.

From an early age, Arian had been told that magicians were men...a concept that she simply would not accept, and her magical training began from there. She has studied and practiced the art for a long time, and her skills are certainly a reflection of that. She is as good, and in many ways better, than any male magician out there. The thing that separates her from most is her adeptness at sleight-of-hand. I am a firm believer that just about anyone can do prop magic, because it really requires no skill, just a practiced presentation. Sleight-of- hand is completely different-the steady and skilled manipulation of cards, birds, cloths, etc. is no small feat and truly is an art; and because it is such a skill, it never gets old and can be watched again and again. This is not the case with the prop magic.

With that in mind, the best parts of her show were the parts when she used her skills at prestidigitation. The rest of the show was made up of prop magic, and while it is always nice to have a mix of the prop magic and close-up magic, the prop magic (even though it was well done) was really just a theme and variation on prop magic that we have seen time and time again.

I have always liked Arian. She is a truly lovely person both inside and out, and I have always been a fan. I want her to succeed.

That being said, here is the critique... There are stereotypes with magicians...first, that they are male; and second, that they are suave, cool, and slick. Arian has overcome the first element, but is still struggling with the second. It appears as if she wants to have that debonair demeanor, but it actually works against who she is. I believe that every performer needs to define their persona...and of course it works best when that persona comes from the person.

Arian is beautiful, sweet, and soft spoken...and because this is who she is, the slick sophisticate does not work for her. When she partners with another woman it feels awkward. When she speaks it negates the intrigue.

Now either she needs to get some good vocal and acting training, or she needs to find a more suitable persona that would work in her favor. I would love to see her come out as a magical homemaker. I think that the possibilities for her would be tremendous...but that's just me.

"Secrets" is a good show. Arian Black is not only a good magician, but she is also one of the top female magicians in the world. I have my criticisms, but I am also her fan. It is worth going and seeing.