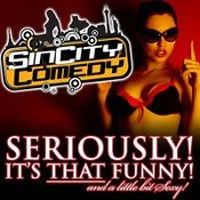 Sin City Comedy is playing upstairs at the V2 Theater inside the Miracle Mile Shops at Planet Hollywood. In many ways, this is a typical comedy club, in that; it brings in a good selection of comics that rotate through the club on a weekly basis. It is different from many comedy clubs in that not only is the talent superior to many other clubs in the city, but it also presents a dancer that performs a burlesque-style dance routine between each of the comics. It is a fun and delightful evening.

Every night there are three comics that perform on the stage. The opener also has the hosting duties. Then there is a featured comic, and finally, the headliner. Since the talent rotates on a regular basis, it is difficult to critique any one comic in a meaningful way. But I have attended Sin City Comedy on numerous occasions and feel that it would be better to look at this production in a larger overview way.

There are three comics each night...I have never seen a bad headliner. Every comic that performs in the top spot of the night proves why they have earned that slot and are always hilarious. Of the two other comics, one is always good, and one is always not so good (it's always a matter of taste,)...but there is comfort knowing that the headliner will be terrific.

Then there is the dancer...always fun, and it breaks up the evening nicely. You never really know what to expect with the dancer, but it is always a delightful surprise. The burlesque feeling of the act keeps it sexy and fun.

The success of any comedy club is hinged upon the ability of the management to bring in good talent. Sin City Comedy is run by comic veteran John Padon. He has a ton of practical experience as well as the contacts with other comedians to make this a success room.

John occasionally works the room as the host and emcees the night and gives it that "Old Vegas" feel. More often than not, John is working a gig. He has worked most of the rooms in town and has been the comic for Fantasy, X, Carrot Top, and many other shows. He is a working comic pulling double duty as the operator of his own room. He stays very busy.

The V2 Theater is a very busy spot. The theater hosts multiple shows, and literally, as people are exiting on one side of the space, another group is entering from the opposite side for the next show. It is an oddly shaped space and there are bad seats, but it is not cramped like most comedy clubs are.

The best thing about the night is that it is simply a fun enjoyable evening out. One forgets the about joy and power of a live comedy performance. Everyone owes it to themselves to get out and see a show, and this one is a great choice.

Sin City Comedy is a lot of fun. And even though you may not know who you will be seeing, trust that you are in good hands with John Paden at the helm.