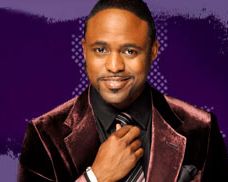 Wayne Brady: "Making %@*T Up" is playing at the Venetian Showroom in the Venetian Resort and Casino. It is an improvisational show that is created on the spot through the suggestions of the audience. The structured improv sketches are accomplished with his partner on stage and backed up by a small band. For the most part, the show is hilarious...it sometimes struggles when either the suggestions are banal or the audience volunteers drag action to a halt. Wayne Brady is one of the most versatile performers in show business today. He has been entertaining audiences with his acting, improv, singing, and dancing on television, film, and the stage.

Brady has gotten a lot of television time lately, and has guest starred on The Dave Chappelle Show, 30 Rock, How I Met Your Mother, Dirt, and Everybody Hates Chris. He became well known for his improvisational skills on ABC’s Whose Line Is It Anyway? for which he won an Emmy and earned four Emmy nominations. Brady went on to host his own syndicated talk/variety show The Wayne Brady Show for two years. Brady picked up two Emmys for Outstanding Talk Show Host and the show won an Emmy for Outstanding Talk Show. He can also be seen hosting Don’t Forget the Lyrics.

Brady is a well-known triple threat performer. He dances, sings, acts; and he does them all well. In this production, he brings out all of his skills and stays on top of every suggestion and situation. What we see more than anything is the quick and brilliant mind of Brady. We watch as the wheels of his mind turn and come up with some amazing answers to what would normally be impossible situations. Improvisation is an interesting acting skill. It is a practiced art that certainly gets better the more it is done, but there is still that element of spontaneity. It is amazing to watch a masterful improvisational performance.

As audience members, we do our best to come up with what we might say if we were given the situation and circumstances...and inevitably, our solutions pale in comparison to what we are given by Brady.

Brady is made to look ever better because of his partner and the musicians that are onstage with him. They support all of his efforts and even mask some of the more awkward moments.

Wayne Brady: "Making %@*T Up" is a great show when all of the elements are working well together, but it is a fragile greatness---one that can be brought to a grinding halt for almost any reason. On the night that I saw the show, there was one volunteer that was brought up from the audience that was just terrible. The show went from funny to awkwardly quiet...the best thing that they could do was to end the sketch as quickly as possible.

Wayne Brady: "Making %@*T Up" is a lot of fun, and it is worth seeing. Seeing a brilliant mind combined with a lot of talent is always a great combination.