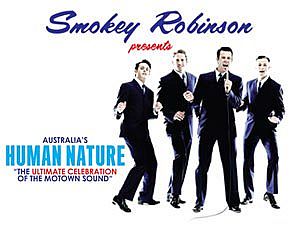 Note: Now playing at the Venetian
Human Nature is playing in the newly named "Human Nature Theatre" at the Imperial Palace. Human Nature is an Australian vocal pop group that sings the hits of Motown. With the endorsement of Smoky Robinson, the group has just successfully celebrated their one-year anniversary and has signed on for an additional two-year run. The songbook of Motown seems to be a perfect vehicle for this quartet of singers. It seems impossible to not like what you see and hear.

There is an obvious oddity with this group...it seems almost sacrilegious to have four white guys from Australia singing the hits of Motown. If it weren't for the endorsement of Smoky Robinson, their acceptance would be much harder to sell, and even with that, there is a part of some people that want to dislike this group before they even step inside the door. Not only is Motown almost solely associated ethnically, but it is also one of the truly American products and contributions to music that we have. As soon as we hear the group, though...we realize that this is just great music being performed by great singers, and all of that other nonsense really is just nonsense.

Andrew Tierney, Michael Tierney, Toby Allen, and Phil Burton comprise this group that actually got together originally as a doo-wop band over twenty years ago when they were all in school together in Sydney. They were exceedingly successful as a boy band and racked up 17 Top 40 hits and five Top 10 hits in Australia, and their albums all went multi-platinum.

As the "boys" outgrew their original teen market, as well as outgrowing the moniker of being "boys," they decided to pay tribute to the music that influenced them from the very beginning, and released an album of Motown hits in 2005. This brought them new success in an entirely new market. Human Nature opened for Celine Dion and Michael Jackson on their Australian tours, and they also caught the attention of Smoky Robinson.

Human Nature came to the Imperial Palace in May 2009, and have delighted audiences ever since. Their new deal keeps them here until 2012, with dates left open for abbreviated tours.

The show is just a masterpiece of music...the harmonies, the rhythms, the singing, it is just wonderful; and it is accented by terrific and tight choreography, and of course the band that backs the group up makes a huge difference.

It is also refreshing...when you hear Human Nature, you realize what an impact that the music of Motown has made on a global level. That piece of American culture that has permeated beyond the borders and has positively affected the people of this world. It is a great show, and a fitting celebration of this music.