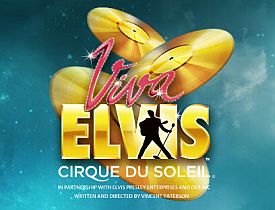 "Viva Elvis," the new production by Cirque du Soleil, is playing in the Elvis Theatre at the Aria Resort & Casino inside the new City Center complex. Both City Center and "Viva Elvis" have been highly anticipated by Las Vegas...both have had extremely high expectations, hoping that with the addition of these things that somehow the economy of the entire city will be turned around. Both have been under scrutiny, both opened well, but neither could live up to the hopes, dreams, and expectations that were set before them. This tribute to the King is a great start and may yet indeed go beyond all that is expected of it.

None of the Cirque shows have been fully realized when they opened. They have all had a continuing process of reevaluation and refinement throughout the years. "Viva Elvis" will be no different, but when examining the level at which this one opened over several of the others, "Viva Elvis" is way ahead of the curve. There are certainly some oddities within the show, but there are also moments of brilliance and awe.

There is always some sort of interaction with the audience prior to the curtain with the Cirque productions. In this instance, the interaction came in the form of some of the dancers portraying squealing, giddy teenage girls eager to see an Elvis concert. Well...they are not very good at the interaction yet (they're dancers, and they needed actors to pull this off,) and once the show starts, these characters and that entire motif are dismissed.

That type of appearance and disappearance of themes, characters and motifs is a problem throughout the show. It is a scattershot effect that is truly a hit or miss approach to the life of Elvis. A lot of the choices seem completely random. The life of Elvis should be the thing that pulls everything together, but even that sporadically jumps so randomly and awkwardly that we're not exactly sure where we are supposed to be. The actor portraying Colonel Tom Parker does deliver some narration to help guide us (narration in English is a first for Cirque by the way,) but in fact these sequences do more to kill the pace and the energy of the show.

The most complete and fully realized number is "One Night," in which two acrobats work their craft on an oversized metal guitar that is suspended over the stage--- rife with meaning, significance, beauty, and spectacle; this is Cirque at its best.

"Got a lot O' Livin' to Do," is certainly the most spectacular and "funnest" number of the entire show...this is the number that had everyone talking after the show. However...it really doesn't have much to do with the life of Elvis; it's sort of forced into place. It is really just an excuse to do some amazing stuff on trampolines and fun costumes. It's a great number...not significant to the story, but it's a great number.

From there, it is a mix of numbers that evoke a range of emotions and questions...they are good, fair...some make you look at your watch, some make you question why...others are so much fun that you don't care if they fit or not.

The most striking element of the production is the video footage that we see of Elvis. In this Elvis show without an Elvis, the production is dominated by the image of Elvis on the screen. There is something about the man that makes you want to watch him, and suddenly all of the impersonators pale by comparison. Elvis is still the King.

"Viva Elvis" is a show that Cirque will eventually get right. It is a lot of fun. There are times of greatness...and the rest will fall into place...eventually.