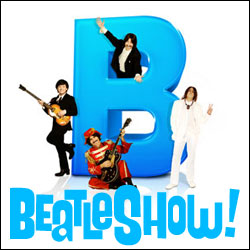 BeatleShow! (formerly, The Fab Four Live;) is playing inside the Saxe Theater in the Miracle Mile Shops at Planet Hollywood. It moved from the V Theater not too long ago, and for this show, it is a good move. This is a tribute show (obviously, to the Beatles---their sound, their look, their music, and most of all, their legacy. The recreation of John, Paul, George, and Ringo is done well, and I appreciate that the emphasis of the recreation was with the music. The sound of the band is far more important than the look. You do get the feel of what it might have been like to be at a Beatles concert. It is emphasized on several occasions that this music is being played and sung live-another element that I really appreciate.

The show is broken down into three distinct parts: the early Beatles music of the 60's, the Sgt. Pepper era, and their later and more mature music that cemented their place in musical history. Each of the sections includes elements that help to frame them in their historical and cultural context.

I really appreciated the attention to detail that these musicians took in recreating the look and feel of each of the Beatles---the high hold that John used on his guitar, the left-handed bass playing of Paul, and the matchstick grip that Ringo used in his drum playing. Additionally, the sound that these four musicians produce is so good that it did, in fact, sound as if they could be lip-syncing the performance. It wasn't until the solo performances that you could better hear the separation.

While each of the sections was musically done well, the transitions from one section to another still need work. We all know that the musicians need a break, and they need to do their costume changes, and the transition from one era of music to another is not an easy task...right now it looks as if they are doing the best they can until something better comes along. The introduction of Austin Powers for the last section of music really didn't work for me.

The first part of the show was, of course, hosted by Ed Sullivan. The Sullivan did a great job at setting the stage and introducing the Beatles. The section had all of the best known early hits: I Want to Hold Your Hand, Hard Days Night, Twist and Shout, etc.

The second part used the Sgt. Pepper album for their music and their colorfully costumed look. Additional videos helped frame the feel of the "Beatlemania" that swept, not only this country, but internationally---hearing "commoners" sing Yellow Submarine was priceless.

The last part brought out all of the more meaningful long-lasting hits that solidified the Beatles legacy. The message of Peace and Love is just as meaningful and relevant today as it ever was.

Every Beatles show that I have ever seen has gone through the career of the group in a chronological order, but it is the early music that is the most up-beat and fun. The later music (while certainly more mature,) is colored with the turmoil of the time. Just once I would like to see a show that brings back the joy of the early music to the end of the show. I want to leave the theatre with that spring in my step...just a thought...

I enjoyed this tribute show. The musicians did a great job. I am a Beatles fan as well, so I was certainly both predisposed to liking the material, as well as being ready to be protective and critical of any missteps to the music with which I grew up. I am not sure how a non- Beatles fan would take to the show. Ah, kids today... Would they enjoy the music as much as me? I wish that I had brought my daughter to see what she thought...for the fan, however, it was a great tribute of the Beatles greatest hits.

I would recommend the show to anyone who has ever been a fan of the Beatles.