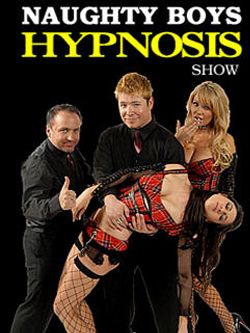 The Naughty Boys of Hypnosis are playing at the Harmon Theatre on the outside of Planet Hollywood. It is a comedy hypnosis show that tends to be on the...well, "naughty" side. The show is unique in the hypnosis genre since the production utilizes two hypnotists instead on one. These two brothers of hypnosis are bringing a new age of comedy hypnosis to the forefront of entertainment in Las Vegas. Corbin Craft and Rolan Whitt are two extreme hypnotists that are using their talents to entertain and to pay homage to their father in hypnosis (and in life...) Dr. Naughty. Dr. Naughty captivated audiences around the world, and especially in Las Vegas, for over four decades.  Dr. Naughty had one of the most intrinsic experiences a show participant could ever have.  The Naughty Boys perform an adult Comedy Hypnosis show of the same caliber as their father.  They are creating new sketches, while also bringing a new brand of comedy hypnosis to the next generation - (while continuing to perform some of Dr. Naughty’s most famed sketches.)

Now granted...I am a well-documented disdainer of the hypnosis show genre. So, you may ask, why the sudden praise of these performers? (It is here that I must insert my disclaimer for this show...) I have gotten to know Corbin and Rolan both personally and professionally, and I must admit that I respect them for both their character and their dedication to their craft---so much so, that when they secured the Harmon theatre as their venue, I called the producer (whom I also have known for an extended period of time,) and asked if I could run the sound and lights for the show in order to help boost and support them. I really want them to succeed.

It has been very interesting watching the show on a nightly basis. These guys are the "real deal." They do not use any plants or actors for their show. (I have known several hypnotists that do...) They really just take whoever is willing to get up there on a nightly basis. That being said...the shows vary widely in their degree of success. When there are willing participants, the show is great. When there is a lot of resistance in the room, the shows are a lot tougher... (I actually understand the desire to use plants...but while it insures a consistency and success on a nightly basis, it lacks integrity.)

Obviously, the larger the audience, the easier it is to find those people willing to volunteer. The earliest shows of this run were the toughest...when it was a struggle to find a handful of folks that were even willing to enter the showroom let alone get up on stage, but as the ticket brokers have gotten to know the show and have realized that it is not a fly-by-night operation, they have been more willing to sell the tickets, which in turn, has insured more successful shows.

The show, of course, still contains all of the usual trappings of the hypnosis show genre; however, the usual warning of "caveat emptor" that I would normally give to all volunteers does not apply so much with these two performers. They do, in fact, take care of their volunteers, and they are sensitive to the needs of each individual. They are the only hypnotist for which I would go onstage...that’s saying a lot.

A balance of humor, mystery, and perfect timing blend the "Naughty Boys Hypnosis Show" into a delightful experience all can enjoy.