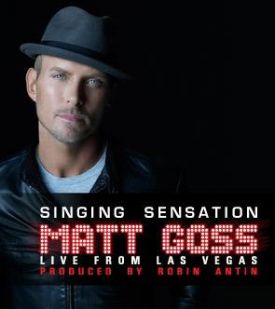 Matt Goss is playing a ticketed lounge show in the "Gossy Room" at the Palms Resort & Casino. The show that I saw was a true travesty...Goss seems to have talent, but all of his skill and charisma was completely overshadowed by a late start, bad lights, a cramped space, and incompetent employees throughout the casino and venue. Here's how the evening went...I arrived early, like I always do...I needed to find the box office so I asked a cocktail waitress where I could find it. She said, "I don't know." The next employee pointed me down another direction...also wrong. The third employee sent me to the concierge...the concierge gave me a blank look and had to ask another concierge where the box office was...thankfully, she knew. With tickets in hand, I waited in line for the 10:00 show...and waited...finally at 10:00, they decided to begin the seating for the 10:00 show. Not being a big space, the seating went quickly, and I anticipated that the show would start at ten or fifteen after...by 10:30; I figured that they were just trying to make money selling cocktails. By 10:45, it appeared that they were holding up the show to cater to some VIPs...which made it appear as if they were greedy for the cocktail revenue and inconsiderate. I went to the back and asked the technicians what the hold up was. They said that they were just as frustrated as everyone else; they didn't know anything; and they were waiting for some word as well. At 11:00, the show finally started...of course by this time, an hour late, I was so frustrated with everything that I could barely watch the show. The first thing that struck me was the lights...they were horrible...bad positions, bad focus, bad coverage, atrocious color choices...the lighting was really REALLY bad. Did they spend any time at all setting lights? From the outcome, it didn't seem so. The lighting was really horrific. Matt Goss has talent...unfortunately he did not have enough talent to be able to pull me out of the funk created by the mismanagement of everything else. There was never even an acknowledgement about the late start. Audiences are usually pretty eager to forgive, but no apology or acknowledgement was forthcoming....and in all honesty, is it fair to judge Gossï¿½s talent based on all of these peripheral elements? Probably not, but I can only write a review based on the show I saw...and this is what I got. The musicians are all talented players...that was very evident. The dancers...well...I wish that they could have danced...there just wasn't enough space. They did some Go-Go moves, a lot of posing, and...not much else. There just was not enough space for them to move. They looked as if they could be talented; they just couldn't show it. By the end of the show, I was just happy to be leaving... It is a shame. Goss seems to be very talented, and yet, his show was ruined before it even started.