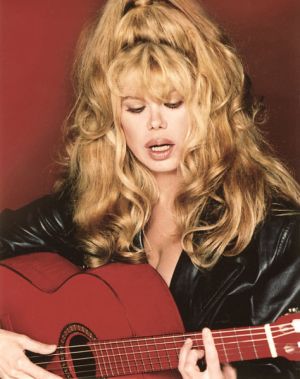 "Charo in Concert: A Musical Sensation" is playing at the Riviera Hotel & Casino. She sings, dances, plays her guitar, and never ceases to entertain us. This is a real Las Vegas experience. She is a classic and tremendous headliner whose charisma and personality fill the room. She is great at everything she does, and surprisingly to me, extremely adept at comedy. It is a delightful evening. The show is separated into two parts. The first part is all about her singing, dancing, and telling some of her many comedic stories. You absolutely believe her genuine spirit as she describes how wonderful it is to be performing in Las Vegas. She wins the audience from the moment she gets on the stage. The second part of her show is all about her playing the flamenco guitar. It is beautiful. I am already a fan of flamenco guitar, and she is one of the best. The two parts are separated by a dance interlude performed by her dancers, "The Soul of Spain." They are all tremendous dancers and have certainly earned their title. Charo started performing at a very young age. She tells us about having to lie about her age in order to even be able to perform in casinos. She has become an American pop culture icon, and she is still an international singing sensation. Charo is now back on the Billboard charts with her latest dance club hit - EspaÃ±a CaÃ±Ã­,, the traditional bullfighting song. Charo teamed up with top-name DJs and producers from around the world, who added their own dance mixes to her virtuoso guitar performance and ended up with whatâ€™s become a huge hit at dance clubs around the world and earned Charo a World Dance Music Award Nomination. Charo also teamed up with World of Wonder to produce the video, entitled "EspaÃ±a CaÃ±Ã­: Dance, Donâ€™t Bullfight." The video is Charoâ€™s protest against bullfighting, which is still practiced in many cities across Spain and Latin America. Charo, like Pamela Anderson, Paul McCartney and Pink, is a member of PETA who speaks out against animal cruelty. Since the 70's, Charo, the musician, singer, comedienne, stage and screen performer, has been an integral proponent of contemporary Latin music. The spotlight on Charo has been shining brighter than ever since her acceptance of the "Female Pop Album of the Year" award. She received this accolade at the Billboard International Latin Music Conference for her flamenco inspired platinum album, "Guitar Passion." Charo is an award-winning recording artist, and she certainly does a great job at continuing to entertain audiences. She embodies the spirit and the essence of a true classic headliner, and everyone should take the time to see her.