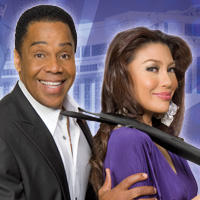 "Voices" with Earl Turner and Lani Misalucha is being performed at the Shimmer Cabaret at the Las Vegas Hilton. These two incredible talents perform both individually and together to produce a wonderful evening of musical entertainment. Misalucha won the "Best Voice of 2008," and Earl Turner brings his stellar reputation as an entertainer to this production. Each of these talents can hold an audience individually, and together, they bring a vibrancy and a variety, which is unique to the shows in the city. I have been a long time Earl Turner fan. I have seen his show in a variety of venues for more than a decade and have always recognized him as a superior talent. The first time I saw his show was in a curtained off corner lounge inside the Rio, and from that, I followed him to the big room at the Rio to Laughlin and to Palace Station after his return from New Orleans. I root for this man because his talent always shines through, and he never fails to put all of his energy into every performance. In every venue and venture, I have wanted this man to succeed. I have only seen Lani Misalucha one time prior to seeing "Voices." It was when she was performing with the Society of Seven. The traditionally all-male variety show was well served by her talent and abilities. She would stop the show with her singing, and there was always the desire to see more of her on the stage. They initially seemed like an odd pairing to put a show together, but my initial instincts misled me. Together they played off each other beautifully, but also gave the other the space and time to shine individually. Both of them have such a tremendous ease and confidence on the stage that they win the audience over from the very first note. In order to keep things fresh and fun, Turner and Misalucha have several different versions of the show. It also keeps fans coming back for additional performances. The body of material that each of these performers has to draw from is incredible. With the emphasis on the singing, they of course have some of the best musicians on the Strip to back them up. They also offer some incredible offers to encourage people to come in and see the show. Buy a ticket for any Las Vegas show, concert, or special event and use that ticket stub to receive a complimentary ticket with the purchase of another ticket. This deal will run through the summer. This is classic Vegas entertainment offered by two great talents. It has enough appeal to please a huge diversity of audiences and has enough variety to make people want to come back again and again.