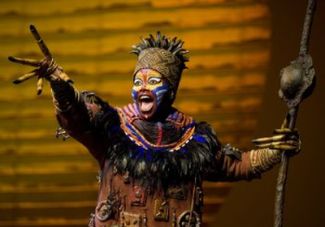 "The Lion King" is playing inside the showroom at Mandalay Bay. It is one of the most popular shows in the world, and is the winner of six Tony® Awards including Best Musical, eight Drama Desk Awards, six Outer Critics Circle Awards, the New York Drama Critics award for Best Musical, the Evening Standard Award for the Theatrical Event of the Year, two Olivier Awards, a Theatre World Award, the Astaire Award for Outstanding Choreography, two Drama League Awards and a Grammy® Award for Best Musical Show Album. The spectacular award winning Disney extravaganza is brought to fruition in all of its glory to the stage at Mandalay. It joins the seven other highly successful companies of "The Lion King" currently running all over the world, including New York, London, Hamburg, Paris, Tokyo and Fukuoka, as well as the North American National Tour.

Vegas is lucky to have this production, and we desperately need more legitimate productions like this to take up residence in our city. Vegas does appreciate full-length Broadway productions in spite of what others may think. "The Lion King" is a great addition to the offerings on the Strip.

Disney has had tremendous success in translating their movies onto the stage. It has taken remarkable creativity and expense, but the effort has certainly been worthwhile. Every aspect of the production is wonderfully done. The costumes are incredible. The scenery is beautiful. The entire cast is brilliantly talented, and the musicians are great. The show never misses an opportunity to use the aisles through the auditorium and add spectacle and grandeur.

The story of "The Lion King" (loosely based on Shakespeare's, "Hamlet,") is part of our modern cultural awareness. Most people have seen the movie repeatedly, and the challenge of the stage production is to honor the story, and yet allow an open freshness to the play so that as the audience, we get to experience it as if it were the first time. As the play progressed, I found myself anticipating specific scenes and wondering how they would be able to translate the scene from the screen to the stage. Each time, I was pleasantly surprised how each of the tasks was accomplished.

Now here is my conundrum...the production has the best of everything---sets, costumes, props, music, performers, etc. It was well executed and creative. The show has received awards, lauds and praises wherever it has been...so why did I leave the show feeling under-whelmed? Why did I feel that there was something basic and fundamental that was missing?

I realized that the problem was probably with the style and precision of the production itself. Everything was so perfect with nothing being left to chance that somehow they missed out on the humanity. We don't get to feel the people and the personal connections. Everything is so clean, ritualized, stylized, and sanitized that we lose the relationships. We see the all the style, and we miss all the heart. Many of the supporting characters were able to bridge that gap, but the relationships that really mattered didn't make it.

"The Lion King" is a great show, but it is a show with small children in mind, and because of that, there are certain character elements that seem to be lost. I did like the show, and I'm sure that I'll be back...and I'll bring my nephew.