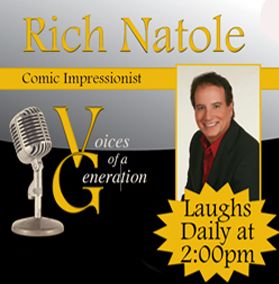 Rich Natole is playing inside the Harmon Theatre at the Miracle Mile Mall at Planet Hollywood. Rich is a comic impressionist with a good repertoire of voices. He is a straight impressionist along the lines of a Frank Gorshin or Rich Little, rather than a singing impressionist such as Danny Gans or Gordie Brown. His type of impressions and show should be a welcome addition and relief to the entertainment scene in Las Vegas, but unfortunately, due to the venue, the time, and the material; the show falls short. Rich is a very talented man. In spite of the shortcomings of the production, his talent certainly shines through. His impressions are spot on, and his charisma makes him immediately likable. Given the ideal circumstances to produce a show, he could do really well here. It is sad to say, but if he is self-producing this production, he should get out of this situation immediately because there are too many things that are working against him to be successful. The Harmon Theatre does not work that well as a venue for Natole's comedy. The 2:00 time slot is an awful time for this show as well. This does not work as an afternoon show. The summer months are a hard time to pull people off the Strip to come into the theatre. There is no foot traffic in front of the Harmon Theatre. There are very few advertising opportunities, which are going to encourage people to make the trek out of the Miracle Mile Mall or make the trip over from Las Vegas Blvd. It is a bad situation for this production. Rich Natole has a strong resume of credits...but we've never heard of him. It is a point that is certainly driven home with a pre-show video that includes many Vegas notables...none of which allege to know the man. "He's the funniest man we've never heard of." It is not the strongest selling point to start the show. We begin to question...if he's had all these opportunities, why haven't we heard of him? The other thing that seems to bog this production down is a lot of the material. It is, of course, a trap...when you do the voices of past celebrities, you do those lines that are associated with them, and since we know all the people, we know all the lines... And much of the stand-up material was taken from Internet fodder...he needs a new writer. He needs to find a way to inject a freshness into all of the people he does. He is certainly capable of this. He has the talent and the ability. It's hard to see a good and talented performer in an impossible situation. The current show just doesn't work. Rich is not going to be able to advance his career at this venue. The best that I could suggest for him is to use this time to try out lots of new material and truly hone his show...in the meantime; he's a talented performer that needs our support.