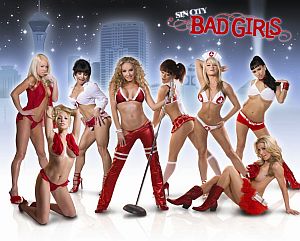 "Sin City Bad Girls" is playing inside the Shimmer Cabaret at the Las Vegas Hilton. This is the best and most creative adult review that's in town today. The small cast, small stage and the limited support in technical areas caused this show to excel in talent and creativity. The show is well thought out, well executed, and the talent really shines through. Since the show opened, it has just solidified and gotten better. The adult review genre has been languishing in recent years, and it is nice to see something of quality finally come through. Michael Chambers directed and choreographed this show, and he should be proud of his results. The topless adult review has been a mainstay of Vegas entertainment for decades, and even though this style goes through both good and bad periods, there have always been a handful of shows to fill that niche. "Sin City Bad Girls" came onto the scene with a lot of competition, but has certainly shown through as a bright spot in this genre. When I first saw the show, I actually did not expect much from this production...a small show, on a small stage, with a small cast, with a modest budget. The only way to overcome the limitations was with talent and creativity...and they did. All of the dancers are strong and beautiful. Having musicians back the performers is wonderful. The singer, Lorena Peril, is amazing. She is certainly a standout in the production with her strong voice, great body, and inviting charisma. Lorena was with "American Superstars" at the Stratosphere and also appeared nightly in Platinum Productions' "Sin City Heat" at the Hilton. She is a star in this show. Shows are about expectation. Opening at the same time was "Peepshow," backed by a huge company with money and name talent was brought in... I was sorely disappointed. The budget for "Peepshow" was around 12 million dollars. The "Sin City Bad Girls" probably had about 1 percent of that budget. It's the same concept in that it is an adult dance review with singers and a live band (in recent months, "Peepshow" has reduced the number of dancers and have gotten rid of the live band.) The "Bad Girls" had third of the cast, and a quarter of the space; but it was so much better executed and conceived. This little show at the Shimmer Cabaret blew "Peepshow" out of the water. It was so much more complete and clever...I wish that they had the budget of "Peepshow." They might have been able to really do something with all of that money. I hate to compare shows in a review, but "Peepshow" made me mad. I hate the waste of money, no poor concept...and these are both shows that opened about the same time, with the same genre and concept, and sought the same market share. The comparison does, however, make "Sin City Bad Girls" look even better. Seeing the one show and then seeing the other made me realize that the "Bad Girls" got it right. I was thoroughly engaged in the production, and I didn't realize that the time passed so quickly. I'm glad that I got to see the show again. It just solidified everything that I had previously asserted about the production. The dancers are great. I was blown away by the singer. The musicians were superior. It is a show that is worth going out of your way to see.