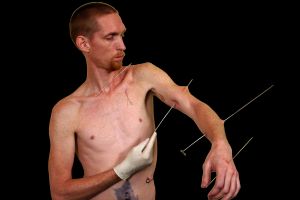 "Freaks" is a show that is playing inside the showroom at O'Shea's casino. It features the most extreme "freakish" human behavior including the skewering of skin, glass eating, walking on glass, sword swallowing, and a variety of other behaviors that are guaranteed to make you squirm, cringe, and gasp. And yet, the most surprising element of this production is the theatrical setting in which these behaviors are set. The brief scenarios evoke a wide range of emotions that seem contradictory...you laugh at the same time you are disgusted, and you feel tenderness while you wince. It is an interesting combination of emotions that exhausts you by the end of the show.

I am very conflicted about this show...I liked it, and yet, this is not a show that I want my daughter to see...there are just too many bad ideas in this production that have to have been spawned by extreme boredom. What would make you want to stick a spiral metal coil in your nose and out your mouth with a power drill? What is going on in your life when eating a light bulb sounds like a good idea? It is announced right at the start of the show, "this is not a magic show. Everything done by the performers is completely real." Why would anyone do these things to themselves? It is a conundrum that is baffling. This, of course, is also the fascination with this show. How can you not watch?

This is certainly an evolution to a traditional sideshow. The settings and the scenes that are played out with the stunts bring this show to a much higher level. There is emotion and feeling---oftentimes that is completely unexpected. I didn't expect to feel the tender caring between a couple as the man sticks a metal pin first through her arm and then his, in essence, locking the two of them together. I didn't expect to laugh and find the queefing of darts through a blowgun at balloons cute. There are a lot of unexpected elements to this show.

Additionally, good lights and sound have never really been a part of traditional sideshows. The strong production values of this show really make a difference with the artistic interpretations and help set a mood and atmosphere that makes this show work.

The showroom at O'Shea's is very intimate, which puts every audience member close enough to the stage to hear the sounds of glass being chewed or the sound of a sword being swallowed. Because of the close proximity of everything, the video screen is not being utilized as well as it could and is sometimes a distraction. I could see the action better live than on the screen and really wanted the screen to give me an alternate perspective.

The weakest part of the show is the banter and narration between each of the acts. There are times that the energy from one element to the next seems to fall flat.

"Freaks" really surprised me. I enjoyed the show and have thought back on it enough times that I know it has given me a lasting impression. This is not a show that will quickly fade in my memory. The show evoked so many emotions in me that I was exhausted by the end of it. I had been well prepared to know what to expect in the production, but was still enthralled to watch it live; and I must admit that I'm the squeamish one in my family, and I honestly didn't expect to make it through the show, but watching these things in this context made it very watchable...and in spite of all of my pre-show misgivings, I have to say that I would recommend this show. Everyone involved in the production did a good job.