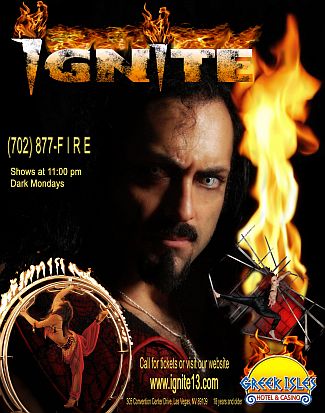 "Ignite" is playing inside the showroom at the Greek Isles. It is a fire and illusion show that is filled with dancing and a lot of atmosphere. The show has just received the Merlin award for "Best New Show," from the International Magicians Society. The show’s star and producer is Antonio Restivo. Restivo, a former fire specialty performer, has appeared as the Lord Vampire in "Bite" and is still currently the evil Mordred in "Tournament of Kings." Restivo brings his full persona and resources to "Ignite," and makes it an evening that is truly memorable and unique. It is impossible for me to objectively review this production because I am the show’s director. I can tell you what I think and what you can expect to see, but it will not be an evaluation as to what is good and bad. I would, however, invite everyone to go and see the show and then have you send me your reviews of the work. It is ironic...I became a reviewer because of my experience and background as a director, but of course I review more shows than I direct, so it is an opportunity for you now to review the reviewer. I am extremely proud of receiving the Merlin Award. I think that it is well deserved...not for me, but for Antonio and the rest of the cast. Since the shows opening, the show has grown tremendously, and the process of improvement has been ongoing. "Do it, improve it, perfect it;" could be the motto for this process. I helped get it up and going, and they have taken it from there. Going back and seeing the show on a regular basis, I am continually amazed at the amount of production value is going on with that small stage. With the right space and funding, this could be a blockbuster show. Doing his own fire and magic show has been a dream and desire of Antonio Restivo for a long time. This desire was put into action when he decided to create a promotional video of some of the elements that would certainly be involved in a show. In the process of creating this video, the management of the Greek Isles had the opportunity to see a lot of the work, and from that, encouraged Antonio to create his show in their space. "Smoke and Mirrors" was the initial working title for the show, but that title seemed to be passive and evoked an image of a tuxedo clad magician or alluded to a con job, rather than support the Gothic adventures of the Dark Lord. "Ignite" fit the bill much better...it is short, active, and is vague enough to garner intrigue, but specific enough to evoke hot and lively images. A lot goes into the naming of a project...a bad or misleading title can do a lot to kill a show. Putting a show together from just an idea is always an interesting process. Antonio had a lot of strong elements and his character and persona, but not a specific way to tie these things together. We really wanted to present a theme, story, or reason to go from element to another, rather than have just a series of unconnected tricks. The scenario we come up with then dictated the order of the illusions and the placement of the dances that we wanted incorporated. Interestingly, the vague scenario that we initially came up with quickly solidified and became specific. The final element of the production was the fire. As the most dangerous and unpredictable element of the show, the fire was one of the elements that I wanted to work with the most...however; the Fire Marshall was not as quick and available as I had hoped. We did not receive the permit that gave us permission to use the fire in the theatre until the day before opening. Antonio, though, is a seasoned fire performer and knew exactly what to do and had conducted fire safety classes with the cast at another location. As the show has developed, more and more fire has been incorporated into the show. Currently, the show is very strong. There have been some cast changes, time changes, and refinements of every sort. It is that continued spirit and effort to always make things better that is going to continue to drive this show. I have received a lot of great feedback for the show. It is a lot of fun to watch, and I am back often...now I encourage you to go, watch the show, and send me your reviews...