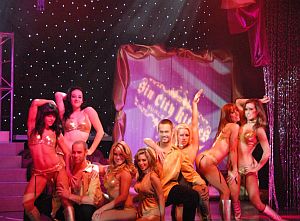 The Sin City Kitties are playing in the showroom at Whiskey Pete's in Primm, NV. It is reminiscent of early Vegas entertainment, in that, the show is inexpensive and being used as a draw for the casino. It is a topless dance review, which is also an anomaly for Primm. The show is fairly strong and a great addition to the city. I hope that it works and is able to draw the needed crowds to make it a success...so far the experiment seems to be paying off. The night that I was there, the place was completely sold out.

It is a bold venture to place a resident show in this space at this time of economic turmoil, but I applaud the leaders in Primm for all that they have done to promote, not only this show, but Primm itself. Primm is a great little jewel that is far too often forgotten or taken for granted. In recent years, they have in brought top headliners that play in a great venue at a fraction of the cost if the show were in Vegas. The outlet mall is wonderful. The other attractions and rides are a lot of fun...and every time I go there, I forget how truly accessible it is. Primm is an easy 30-minute drive...it takes longer for me to drive across town. Primm really is a great place to escape and have fun at a very affordable rate.

The Sin City Kitties is a good effort. It is a good show, but falls short of being a great show. The singing, the dancing, and the band are all good people; but that all seem to fall just a bit short of really connecting with the audience and making it great. Part of the problem is the elementary formula with which they put the show together. We quickly figure out that each woman is going to get her "moment to shine" onstage---and there is nothing wrong with that, it's just the way in which it is carried out becomes perfunctory. There are far more interesting ways to achieve what they are trying to do. Falling back on a formula structure is perhaps safe, but it is also boring.

The choreography is the most interesting part of the show. There is a great use of the space and a lot of unique looks that are created. The use of a couple of male dancers helps a great deal in assisting the female counterparts. The choreographer should be applauded for the work.

The band is decent. It is not the greatest band in the world, but musicians do add so much to the production. If the show had gone for canned music it probably would have been easily forgotten.

The singer is pretty good. She needs to do more to connect with the audience, rather than just hit the notes. It is the charisma and passion that really separates a great performance.

Sin City Kitties is a good show, but it is a great addition to Primm. I will look forward to seeing this production again in a couple of months to see how it improves and adapts itself to the stage and crowds of Primm.