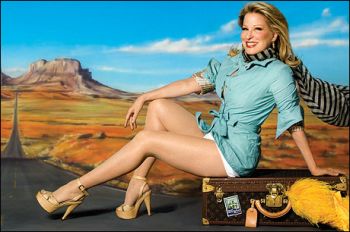 Bette Midler - "The Showgirl Must Go On" is playing inside the Colosseum at Caesars Palace. It is just about everything that any Midler fan could hope for...it is the best of Bette. It is all Bette, all the time. It is all the hits and all the characters...it is hard to be disappointed---especially when three terrific singers, a 13-piece band, and a line of 17 showgirls back her up. The Divine Miss M has done a tremendous job at bringing her show, and her personality, to the Strip.

Since its opening in February of '08, the show has continued to get both stronger and tighter. What was a bit of a bumpy ride in the beginning has now smoothed out. There is still a lot of room for improvement, but the show, as it stands, is a great production. It's difficult sometimes for me to write a review of a show that is really strong...once I say that the band was great, the showgirls were great, the back-up singers were great, and Bette was great...then I still have a page of writing to fill, but I will continue to do a bit of gushing...

Bette's character of Delores Delago is delightful, and the chorus of wheelchairs is great. One of my favorites is the world's oldest showgirl - Sophie; she is wonderfully irreverent, crude, and derisive...and while all of the jokes may be old, they are still fresh enough for us to laugh at them.

The stage at the Colosseum is big, and it looks great when there are showgirls stretched across the length of it; when the band is in the background; and when there are curtains and fabrics hanging from the ceiling. However, when Bette is out there on her own, the space feels as if it is swallowing her up. She is miniscule in the vast expanse of the stage.

Midler grew up in Honolulu, Hawaii, where she began singing at an early age. After winning several talent shows, she moved to New York City, and soon landed on Broadway, playing Tzeitel, the oldest daughter in the hit musical, Fiddler on the Roof. She began singing in clubs around town; word reached the owner of the famed Continental Baths, who immediately offered her a job. Performing at the baths, she developed the trademark act that would make her one of the most renowned talents of a generation. Bawdy humor, revealing costumes and a distinctive voice made for an act that was poignant, tacky and altogether fabulous. "I wouldn't say I invented tack," she boasted," "...but I definitely brought it to its present popularity."

Forty years, four Grammys, four Golden Globes, two academy awards, three Emmys, a Tony Award and tons of record-breaking performances since she hit the scene, the "Divine Miss M" is still going strong. She recently said that although it's tough being a living legend, somebody's got to do it. "In other words", she added, "I'm not retiring and you can't make me!"

Midler is a tremendous addition to the Caesars' line-up. She, along with Cher and Elton John, has made the Colosseum entertainment second to none. The three entertainers rotate their spots throughout the year, so if you want to see someone specific, it is always best to check the schedule.