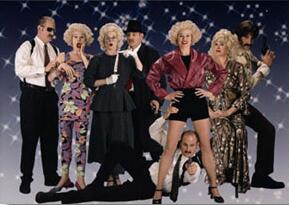 Note: Now playing inside the D Las Vegas
Marriage Can Be Murder II is a murder/mystery interactive dinner theatre presentation at the Egg and I on West Sahara Ave. It is a surprisingly good evening of entertainment. The food is decent, the atmosphere is fun, and the show is intriguing enough to keep the evening moving along at a good pace.

I would like to preempt my review of the evening with a bit of background and perspective on my traditional feelings toward interactive, murder/mystery dinner theatre. I have seen a number of these types of productions, (or should I say that I have been subjected to them,) and I have hated them all. When I got this assignment, it was the last thing that I wanted to do. I felt like a rat in a trap, willing to chew my leg off in order to escape. I tried to finesse my way out of the assignment. I suggested that maybe no review would be better than a bad review. I couldn’t get a baby sitter, so I had to bring my daughter--but, no problem. I needed to make my party three instead of two at the last minute--again, no problem. At every turn, the Marr iage Can Be Murder II company were very accommodating. Solemnly, I faced the fact that I would have to go and see this production.

Usually, the word "interactive" near the word "theatre," generally means that humiliation will be involved for the audience members. Thankfully, this was not the case in this production. Again, it was the atmosphere of caring and respect that allowed people to freely interact without the worry of humiliation. Everyone seemed to have a good time, and people did have the option of not participating.

The Egg and I restaurant is a small venue, away from the strip. It is a nice place to get away from the hustle and bustle of the typical Las Vegas experience. The food was actually pretty good, (again, I was pleasantly surprised. Dinner theatre usually means both mediocre dinner and mediocre theatre.) There was a choice of entrees, a nice salad, and apple pie for dessert.

The evening was very well coordinated between the entertainment and the food service. The hosts for the evening were "Deedee," a ditsy, but extremely quick witted blond; and "Lt. Post," the investigating cop. The two of them played off each of each other very well, and certainly kept the audience entertained as they "interrogated" all of the suspects. They were delightful.

The sound technician was amazing. Added sound bytes augmented a lot of the segments which continually entertained us. The actors use microphones, and so the voices are clear and easily heard. There are a couple of gunshots that are apt to scare children, but beyond that, it was good clean fun.

Finally, is the presentation of the mystery itself. Usually, the mysteries are either simplistically obvious, or completely impossible to solve. The mystery presented here is interesting enough; it is tough, but it is not impossible.

I was very pleasantly surprised with the evening. I was made to feel comfortable, and I was able to have a good time. The mood and the atmosphere put the audience at ease, and everyone seemed to spend most of the time laughing and smiling. Both the food and the entertainment were very pleasing. It is not a big elaborate production. It is a small venue, and a distinctly different type of entertainment then what one would typically expect to get with Las Vegas production. It is a nice alternative, and a good evening of entertainment.