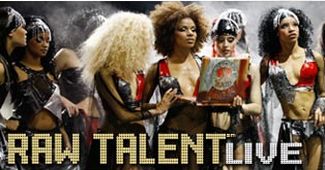 "Raw Talent Live" is playing inside the main showroom at the Sahara Hotel and Casino. It is a dance drama spectacle filled with lots of images and imagery, and while there are some interesting moments in the production, the attempts at artistic surrealism fall completely flat in a convoluted mess of a show. If this production had been a student recital from a college's modern dance department, I would have considered it a valiant effort...and the criticism would be appropriate for that amateur level. Like the student recital, Raw Talent Live offers up a few moments of interesting imagery, but...the work is uninformed. It lacks depth, knowledge, insight, and experiential profundity. The concept itself is weak. It is poorly executed. It is poorly written. The work is exceedingly self-indulgent. The lighting is horrible. The set is poorly utilized. There are some talented performers, but they are badly directed. ...But as I said, it would be a valiant effort, IF this were a student production, but it is not... This is a show on the Las Vegas Strip, and it costs $80 per ticket. There have been many times in the artistic world where an artist has presented an extreme avant-garde conceptual, but incoherent, work; and it is praised as being a break-through moment in this genre...this is not one of those times. A true break-through piece will stimulate something, whether it is emotionally, intellectually, or viscerally. This does not. Raw Talent Live is an exercise in indulgence. It was written, directed, produced, conceived, and created all by the same person, Nicole Durr, or "ND," as she now prefers, and it was created and rehearsed over a two-year period in a private studio without outside influence or commentary. It must have been easy to lose sight of a bigger picture. My biggest quandary with this production is how does something like this that is so bad get such good funding? There is a large cast. The renovation of the Sahara theatre could not have been cheap. They have great promotional materials...this is an expensive show---not even counting the two-years of rehearsal. There is some major funding behind this show, and it is a bit disconcerting considering all of the worthy projects out there that can't seem to get a dime of backing...incredible. Some of the more annoying aspects of the show would include the lighting. It is just awful. There is not one number where the lights are not flashing in the audience's eyes---which makes it hard to see and ultimately just gives you a headache. There is very little isolation or separation. The creation of an atmosphere or mood is completely dismissed, and it seems as if the lighting designer just saw all of the lights in the theatre and simply tried to use them all...but forgot to focus any of them. The set is also badly underused. There were so many possibilities to create so many looks with the stage, but all of those possibilities were lost. Instead, the idea of changing the set became scrims that were flown in and had things projected on them, which became exceedingly annoying because oftentimes nothing was enhanced and the movement of these pieces looked simply arbitrary. The dancers were not utilized well. There are a lot of talented people up there, but the patterns of movement and the choreography is neither interesting or unique. And the worst and MOST annoying thing about this production was the inclusion of an applause track. I could not believe my ears when I heard people clapping and yet no one in the audience was! I looked around...and there were many confused faces in the audience because they weren't clapping (and I had a pretty good view of the audience...remember I said that lights flashed in the audience's eyes in every number? Well, it gave a pretty good view of the audience.) Perhaps that the director, producer, writer, creator, etc, didn't think that we would know when to applaud...I've got news. We, as the audience, knew when to applaud. We just didn't want to. Do not go see this show. It is a waste of time and money.