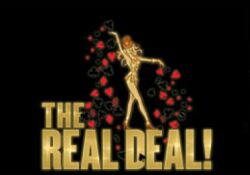 "The Real Deal!" is playing inside the Venetian showroom at the Venetian Resort & Casino. It is an interactive live poker game show that pits professional poker players with audience members in a tournament-style game of Texas Hold'em. While they are playing on the stage, the rest of the audience will also participate with touch screen devices to try and earn points. Through an elimination process, the leading pro, the leading amateur, and the point leader from the audience all play a three-handed finale. If it sounds a bit confusing...it is. Hosted by Vinnie Favorito, this show may be great for the poker aficionado, but for the non-poker-phile, the show may not be quite so engaging.

Because of the popularity of televised poker tournaments, I can understand the concept of the show, but when you place it in the context of pure entertainment, it seems to lose something--- primarily, the money. A very large portion of the engagement and the drama in tournaments is the money...the money that is on the line, being wagered, about to be won, or about to be lost. We see the emotion in the players that are normally emotionless because of the money---with money there is drama. In this show, there is no money. No one is at risk of losing anything. There is nothing on the line, and so there is no drama.

Additionally, poker players may not be the best entertainers. These are people that do their best to maintain their "poker face." Staunchly stoic individuals tend not to be the people that grace the bulk of our stages in Las Vegas.

The biggest complaint that I heard throughout the night was that people didn't know how to use the touch screen devices...it took most people three or four hands to catch onto what exactly was going on. By then, a lot of them felt as if it was too late to get back into the game. I would suggest to the producers that the system be on prior to the curtain going up and allow audience members a chance to play several practice games before the show actually starts...this would allow people to get comfortable with the system and may cut down on the first part of the show being just about instructions. The whole thing is a little convoluted and does need some explanation, and over time, I'm sure that they'll get the patter down to make it more expedient.

The other option, of course, is to choose to not participate. Don't do this. I implore you. Simply watching this show and not participating, ranks up there with watching paint dry. If you go, then participate.

But I must laud the people at the Venetian for doing their best at giving this production the greatest chance of success. These are the biggest names in the poker world, ie. Doyle Brunson, Phil Hellmuth, Eli Elezra, Antonio Esfandiari, Jennifer Harman, Phil Laak, Scotty Nguyen, Gavin Smith, Todd Brunson, and Daniel Negreanu. The hand held devices are top notch, and the computer system that keeps track of everything is wonderful. The video screens and camera work is great. Lacey Jones is a beautiful hostess. The set is beautifully done, and Vinnie Favorito is the best possible choice for the host. Favorito is a brilliant host and a wonderful comedian. (I do recommend Favorito's stand-up show at the Flamingo---all Favorito, all the time. It's great.) The show has all of the elements for a success...except for a concept with great entertainment value.