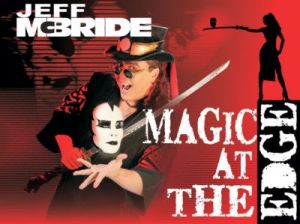 Magician Jeff McBride brings "Magic at the Edge" to the Sound Trax showroom at Palace Station Hotel and Casino. McBride toured the world extensively the past two years with his cabaret- style show "Magic at the Edge." He deftly combines his favorite passions and theatrical talents of magic, martial arts, mime and Kabuki theatre. This is an up-close and personal magic show that is so rarely seen today. Jeff is one of the most respected magicians within the magic community. He is lauded and praised for his talent and his ability, as well as his openness in sharing, helping, and teaching others that hope to be magicians. For those that have seen some of Jeff's shows over the years, this is akin to a show of Jeff's greatest hits. Joining him on stage each night are fellow magician Jordan Wright and dancer Melanie Kramer.

Jeff first came to Las Vegas as an opening act for Diana Ross at Caesars Palace more than 20 years ago. His dynamic performances made him an instant favorite with Vegas audiences, and Steve Wynn selected him to be a regular opening act at Wynn's then newly refurbished Golden Nugget. A few years later, McBride became one of Vegas' youngest headliners performing as the featured act in the Moulin Rouge show at the Las Vegas Hilton. He was one of the leading magicians at Caesars Palace's "Magical Empire" show. Television audiences may recognize him as "Judge Jeff" from the recent "Celebracadabra" series on VH-1, and appearances on magic awards shows on every major network, including A&E's "Mindfreak," and as Joran on "Star Trek - Deep Space Nine."

The show at Sound Trax is densely packed in both space and material. In spite of the fact that the stage and audience space feels very crowded, McBride does his best to use this lack of space to his advantage...you can't escape the fact that all of the illusions are going to be up close and personal, but McBride is one of the best... There is one amazing routine after another. His signature mask routine is excellent, his close-up illusions and interactions through the audience are great, and his playing card manipulation skills are probably the best in the business. He uses the cards appropriately as his finale...because after that, there really is nothing more to say. Jeff was even given the award for "World's Fastest Hands" from Guinness World Records...(but I must say that I really don't know what standard of measurement they use to determine this.)

The mood of the show ranges from the serious and surreal to the light and comical. There are some very nice amusing and charming moments in the show. The perfunctory pulling the child out of the audience moment takes a very nice twist when his routine with the child becomes a masterful lesson in non-verbal communication. It is moments like this that one can see why he has been successful on the international stage. So many of the things that Jeff does works with that universal language

Jeff's run at Palace Station is going to be limited to a few months, and then he is off again on an international tour. Jeff may have missed gaining a huge celebrity status, but he is masterful at what he does, and in many ways, he is one of the best in the industry. This is a unique opportunity to see a magician of this caliber. See him while you can.