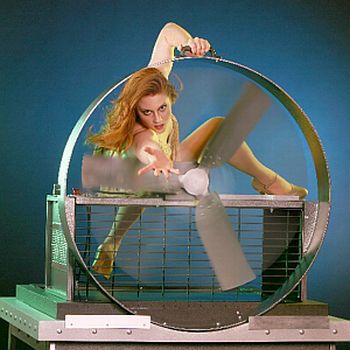 Scarlett: "Princess of Magic" is playing inside the V Theatre at the Miracle Mile Shops in Planet Hollywood. Her afternoon magic show is a family friendly production that has a good variety of illusions, a nice mix of dancing, characters, and interaction; and seems to be working toward a decent and successful show. Since she opened in August, Scarlett has made huge strides and has improved a lot. With just a little bit of experience under her belt, she has gained a tremendous amount of confidence in herself and in her performance abilities. If she continues to improve at this rate, she will soon be a force with which to be reckoned. Scarlett has all of the makings of a good magician. She is nice looking, charming, oftentimes clever; she executes her stage magic well, and while her sleight-of-hand is getting better, it is still only passable...at this point, she still gives away some of the tricks. It is something that only time and practice are going to fix. There is, however, a constant effort to make the show better. She has lost some of the characters that were forced into the show and replaced them with some better illusions. Most notably is the water cell escape---a trick that was in most of her promotional material, but didn’t find itself onstage until only recently. It is a unique illusion that is well executed and you won’t find anywhere else on the Strip. Scarlett is trying to find an identity for herself as a female in a male dominated field. Her first exposure to magic was, of course, as an assistant (the traditional role of a female in magic.) In order to separate herself, and make a significant statement, she must truly establish herself as a magician. There is a confusing line in the established roles...sometimes she is the magician, and sometimes she puts herself in the position of the assistant and allowing one of the dancers to take the dominant role...and while she may be the best choice for being the "assistant" in the illusion, she is not doing herself, and any other female magician, any favors. She undermines herself and everything that she is trying to achieve. She has to be the magician and not the assistant. I like Scarlett, and I want her to achieve greatness...but she really has a long way and a hard road to go. Vegas is a tough town for any magician. If you are going to compete as a magician in Vegas, you had better be ready to play with the big boys because they're all here, and a lot of them feel that they should be in that showroom instead of you. She will have to get at least as good as all of the other magicians in town in order to gain any respect. Scarlett has more potential to achieve greatness than any other female magician since Melinda: "The First Lady of Magic," but Scarlett needs time to get the experience and seasoning she needs. She has made some incredible strides since she open, and she now needs to keep that pace of improvement going. She can be great, and it will all be up to her.