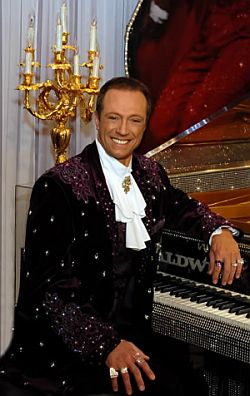 "Wes Winters - A Tribute to Liberace" is playing inside the Steve Wyrick Theatre in the Miracle Mile Shops at Planet Hollywood. This is a surprising little show, which just recently opened up. The production takes place in the afternoons, and it is just Wes and a piano out there. Wes is a self-taught pianist, who plays by ear, and he doesn't even read music, but he has certainly mastered the instrument and does a terrific job at emulating the style of Liberace. Wes is neither an impersonator nor a look-alike, but simply a talented tribute artist who has captured the spirit, enthusiasm and legendary showmanship that made Liberace a beloved icon to millions of people throughout his 40-year career. During the one-hour show, he performs many of Liberace's signature songs, including: "The Theme from Exodus," "The Johnson Rag," "Beer Barrel Polka," and "I'll be Seeing You." He also performs, "Bumble Boogie," "Love is a Many Splendored Thing," "Time to Say Goodbye," and "Mame" among other famous musical pieces. It is just a wonderful show with music. You don't have to be a Liberace fan to enjoy the show; you just have to enjoy good piano music.

Wes won the Liberace Play-Alike Competition in 2003, shortly after he moved to Las Vegas. Since then, he had been performing his tribute show at the Liberace Museum. He had a successful run there for five years...and now it is time for him to move on and move up in the world of entertainment. His show now on the Strip will hopefully bring him many more crowds and accolades. Needless to say, Wes is a masterful pianist. He is personable, charming, and is a nice guy. His charisma is evident throughout the production.

There is a very specific demographic that is really going to enjoy this show...for the most part it's going to be an older crowd, ones' that loved Liberace, and ones' that love piano music. I really enjoyed this show because I grew up with piano music always being played at my house. My mother taught, and now in her seventies still teaches, piano. Not a day went by when there wasn't someone hitting the keys. It brought back lots of memories. The next time she visits, I will be taking her to see the show.

The highlight of the show was when Wes got several song titles from the audience and then folded all of these songs into a medley on the spot. There is a continual amazement at his skill and talent, and it was truly evident in this part of the show.

The one drawback was when Wes played with a click track behind him. I know that it was there to bring a fuller sound to the music, but I often found distracting and annoying. I love the sound of simply a piano.

I hope that Wes's show is a success. His demographic may be a bit limited, but a wider audience than one would expect would actually enjoy the show. It is a show that is worthy of being a mainstay on the Strip.