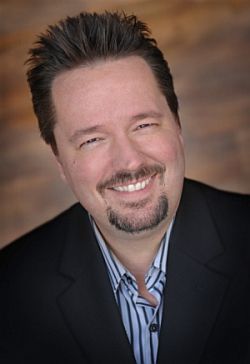 Terry Fator is playing at the The Terry Fator Theatre inside the Mirage. He is a ventriloquist, singer, comedian and celebrity impressionist that gained his notoriety by being selected as the winner of the 2007 edition of "America's Got Talent." The keynote to his entire performance is talent...he exudes talent. He is an exceedingly talented performer that does the bulk of his impressions through his ventriloquism puppets. Backed by a group of terrific musicians, Terry Fator entertains audiences of all ages with his wholesome blend of family entertainment and dazzles them with his amazing talent.

When Terry Fator won "America's Got Talent," he got a contract to perform at the Las Vegas Hilton on a limited basis. The response to him was strong enough for the Mirage to offer him a substantial contact and his own theatre...a theatre at which he just recently celebrated his nine-year anniversary.

The thing that astounds you about this man is his talent. There have been many, many performers and productions in this town, and the ones that always truly stand out are the ones that are founded on the basis of talent. It happens too often that a show comes around and has a lot of flashy elements, but really lacks talent. Terry Fator raises that talent bar in Vegas once again.

Terry Fator is perhaps the first entertainer to combine the art of ventriloquism with celebrity impressions. His puppets, including Cowboy Walter, Emma Taylor, Winston the Impersonating Turtle, and a variety of others; effortlessly perform the singing styles of an eclectic group of stars. He has introduced a new character each year, but this year, he introduced two new characters...Michael Jackson and Paul McCartney.

Fator was 6 years old when he discovered he had a knack for mimicking voices. He began by memorizing Bill Cosby comedy routines. "Friends would come over to the house and they would say 'Do Cosby,'" he recalls. "It was something I was always able to do, and it would drive my parents, brother and sister crazy." When he was 10, he found a library book on ventriloquism and began learning how to throw his voice. He pursued a more conventional performing career in entertainment for 15 years, but in 2001 decided to follow his first ambition: mimicry and ventriloquism. His career turned a corner in 2004, when his manager heard his Garth Brooks impression and asked if he could do the country star's voice through his puppet.

Fator battles the problem of being a small show that is working a big room. There are times when he doesn't seem to fill the space...and the video that accompanies his performance is often out of sync with what is going on...it's a bit odd at times.

He puts on a fun and lively show. I've heard great impersonators, but I've never seen one that can do impersonations with his mouth closed. It's amazing. It is entertaining and accessible to the entire family. He is going to be around for a long time.