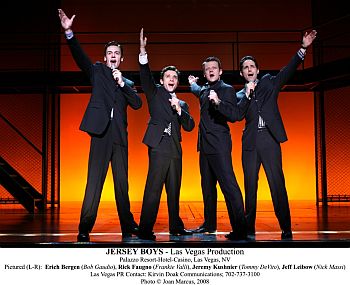 "Jersey Boys" is playing inside the theatre at the Paris. ...Ok, here it is. This is the best show in town. That's it...end of review. (Ok...maybe a bit more...) It's the story of Frankie Valli and the Four Seasons, and the music, the story, the acting, singing, setting, and execution of everything was just absolutely wonderful...The show is so well directed; it is amazing. After two years of playing in Las Vegas, the show hasn't waned or grown stale at all. It is as bright and vibrant as ever...and I look forward to the next time I get to see it. I don't often simply rave about a show and so this is a welcome reprieve from my usual blather. Perhaps it is my background in legitimate theatre that brings this musical out as a welcome sight amongst all of the production shows here in Vegas.

Frankie Valli and the Four Seasons had incredible staying power over the years. Their music, which inspired, thrilled, and excited a generation; had the ability to grow, change, and mature over the span of several decades. They were not part of the psychedelic bohemian movement of the sixties, but rather made their influence on a greater portion of Middle America---the waitress, the truck driver, and the kid that went off to war. Still today, the music of the group conjures up memories of playful dating, the pains of growing up, and of course, romance.

It is hard to imagine that after more than forty years, and more than 175 million records sold, that Frankie Valli and the Four Seasons' popularity would now be eclipsed by the story about their lives. "Jersey Boys" is an incredible musical. It won the 2006 Tony award for Best Musical and has set box office records in New York, Los Angeles, San Francisco, and Chicago...and the new production at the Palazzo resort will certainly be another shining feather in the "Jersey Boys" cap.

One of the things that is striking about this production is the ensemble feel of the piece. It would be easy to separate the Valli character and the other Four Seasons and make them the "stars," but it works so much better when you see everyone pulling their own weight...everyone is a part of this company. They all take their turn at moving set pieces and props...and the effect is that the show moves in a clever and quick fashion that is crisp, clean, and fresh.

Rick Faugno, who plays Frankie Valli, attributes the success of "Jersey Boys" to a combination of the great music and the real story of the four guys from New Jersey. "This is really a play with music, rather than a musical play. It is a character driven, substantive show that has an appeal to more than just Frankie Fans." Faugno was named "Best Singer" by the Las Vegas Review-Journal, and he also performs a one-man show entitled, "Songs My Idols Sang (and Danced.) It has played a couple of different times at the South Point Casino, and I wouldn't be surprised if you see it come back as a semi-regular production.

Rick opened the Las Vegas production of Jersey Boys, but started performing on Broadway when he was only 12 in The Will Rogers Follies. Some of his other Broadway credits include: Conversations with My Father, Fosse, and Chitty Chitty Bang Bang! Rick received critical success in Julie Andrews', The Boyfriend and Shenandoah at the Ford's Theatre in Washington, D.C.

Deven May plays Tommy DeVito in the show. He was kicked off the first national tour of Jersey Boys, and is certainly happy to be back with the production. He won critical acclaim in the title role of Bat Boy, earning a Theatre World Award for Outstanding New York Debut, an well as, Drama Desk and Lucile Lortel Award nominations.

Peter Saide plays Bob Gaudio. He was born in Australia and is thrilled to be making his US debut the Las Vegas Company of Jersey Boys. Peter was recently seen playing the Prince in the international tour of Rodgers and Hammerstein's, Cinderella, playing opposite Lea Salonga.

Jeff Leibow has played Nick Massi since the opening of Jersey Boys in Las Vegas. "The character goes through so many dynamic changes; I'm excited about making him active and alive." Jeff's regional theatre credits include: Jamie in The Last 5 Years (San Francisco Bay Area Theater Critics Circle Nomination), Barry in Putting It Together (San Francisco Bay Area Theater Critics Circle Nomination), Michael in Smokey Joe's Café, Man 1 in I Love You, You're Perfect, Now Change, Radames in Aida, and the world premieres of Memphis (directed by Gabriel Barre) and Kept (directed by Scott Schwartz).

Each one of these cast members is superior in their portrayal and execution of the characters.

So much of the music today is disposable, and the songs of Frankie Valli and the Four Seasons still have an impact with the people that grew up with this music, and now it's appealing to an entirely new generation. "Jersey Boys" is a great show. It is worth the time. It is worth the money. I love it. Go see it.