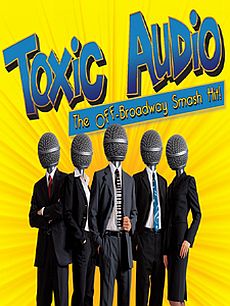 "Toxic Audio" is playing inside the V Theatre in the Miracle Mile Mall at Planet Hollywood. "Toxic Audio" is a quintet of a capella singers that do their best to explore the range and the power of the human voice. They do credit the sound engineer as being the sixth member of the cast and aptly honor him with his very own song---because without his efforts the show would fall flat and be devoid of the mix and effects. Along with the singing, the group adds a lot of comedy and frivolity. The cast includes: Christine Vienna (Soprano), Meg Wasik (Alto), Paul Sperrazza (Tenor), Tim Jones (Baritone), and Rene Ruiz (Director/Bass). Each of the members is individually talented and all get moments to shine on their own, and together, they blend and work exceedingly well with one another. I had a mixed reaction to the production. Some of the things that they do are brilliant and clever, and when they are singing they are tremendous. It is the attempts at comedy where they fall short, and they are not getting the best bang for their buck with the order of their song list. One cast member in particular was especially annoying with his comedy. Paul Sperrazza, who also works as the anchor of the group; mugs, shutters, and is so obvious and obnoxious with his attempts at comedy that by the time we really get to see him shine with his talent, we don't like him. Sperrazza made his first appearance in Las Vegas as a contestant on the reality show, "The Entertainer." He was kicked off the show after he went a.w.o.l. for one episode and abandoned his fellow contestants. "Exploring the boundaries of the human voice," is the tagline that goes along with the title, and it is a concept and an exploration that is usually served well...except for one aspect...they don't speak...and speaking would certainly have facilitated the interactions with audience a lot better than the repeated "pssssts" that were uttered forth. From doo-wop to hip-hop, the group seems to do it all. The best part of the show, however, took place after their first bow. It is a shame. If the group had put their finale number in an early part of the show, I would have dismissed and overlooked a lot of the annoyances that bothered me. It is a short show...just an hour from start to finish, but even at that length, the show felt a bit long. Pacing is a problem. Everything is done at a clipped pace, as if faster is always better. The show and the audience would be better served if we could all take a breath every now and then. "Toxic Audio" has some wonderful moments. It also has some problems, but in the final tally, it is a show that is worth seeing. The singing talents of this cast are great, and we can only hope that they address some of their shortcomings in the future.