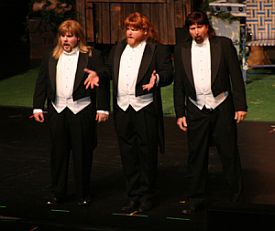 "Three Redneck Tenors" is playing inside the showroom at the Luxor Hotel and Casino. It is the story of Billy Bob, Billy Joe, and Billy Billee as they work their way up the ladder of playing bars and county fairs to eventual success. The songs range from opera to television theme songs, and all of them are presented with enough panache, style, and good ol’ redneck fun that they are all entertaining. They mix NASCAR with Beethoven, lite beer with Puccini, and also present a mean mix of Ave Maria and Dixie. The show will be playing sporadic dates for a while, but hopefully land a permanent gig one of these days. The Three Tenors (Placido Domingo, Jose Carreras and Luciano Pavarotti) did so much to bring classical music back into the forefront of popular culture. The success of the Three Tenors formula led to various imitations, such as the Irish Tenors, Tenor Australis, the Three Canadian Tenors, the Ten Tenors, Three Tenors and a Soprano, the Three Sopranos, The Sopranos, Three Mo' Tenors, Three Countertenors, the Three Chinese Tenors, and Yiddish and Canadian Anglican trios of religious singers both called the Three Cantors. One of the more unusual variations occurred when Carreras and Domingo themselves appeared in concert in Vienna with American singer Diana Ross in 1992, the live recording of which was released as Christmas in Vienna. In 2000, Joe Mantegna, George Hamilton and Danny Aiello starred in the motion picture comedy OFF-KEY, loosely inspired by the Three Tenors...and in Las Vegas we have the Las Vegas Tenors, and we now have 3 Redneck Tenors. The show uses the twist of having some "good ‘ol boys" that sing like birds...and they do a great job. They make the evening very accessible by using culturally popular songs mixed in with the classical fare. Matthew Lord, John Wilkerson, Alex Bumpas play the three rednecks along with Dinny McGuire as "The Colonel." The cast is at its best when they are singing. The script is amateurish, the acting is bad, and the performers seem to only rely on caricatures and stereotypes for each of their parts. Fortunately, the acting and the script are the smaller part of the evening, and for the most part, are easily dismissed when the singing begins. One of the best parts of the show was the medley of television theme songs---all popular and accessible, hearing the trio re-create these songs was a delight. They truly made the ordinary and old, extraordinary and new. Giving us a unique perspective on well-worn material seemed to be a real talent for this cast. By mixing, twisting, and giving an operatic feel to songs that have not been popular in a long time, the cast made us appreciate their skill and singing prowess all the more. The mix of Dixie and Ave Maria is nothing short of brilliant. "3 Redneck Tenors" is a fun show that is worth the effort to go and see. The cast sings wonderfully and makes the evening a delight. If they took the time to hire a professional writer and take some acting classes, the entire show could be excellent.