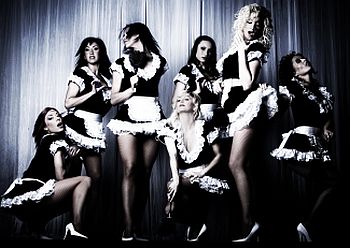 Ooh La La is performing in the Anthony Cools Experience Theatre inside the Paris Las Vegas. It is a show that was specially written for both the room and the cast of female performers. It is a sexy topless show that has the bulk of the performances at 7:00 pm when there is no other real competition in the topless show market. This sultry new show celebrates all things female. Ooh La La features not only an all-female cast, but also an all-female crew, and even all of the songs that are played have female vocals. Cools took a full 7 months to develop and rehearse the show prior to its opening---a luxury that is not the norm in our town. "We wanted to get away from the cookie cutter formula, and wanted to be able to open strong. We just kept working it until we got it right," says Cools Director/Choreographer Gary Thomas was proud to be able to help with the development of the show and bring it to life. He especially focused on the transitions and wanted to be able to move from one number to another without having to use blackouts. The cast rotates out on different nights, but all seem equally talented. The cast includes: Ashley Vail, Cher Westcott, Cynthia Fuhrer, Kendra Phillips, Kelly Adkins, Nicki Taylor, Michelle Diterlizzi, Dela Coutts, and Isabella Rossetti-Busa. The topless variety show features comedy, magic, acrobatics, singing, photography and much more. It wants to epitomize the intelligence and beauty of the woman...but there are several times that it fails to do so... As with any work in progress, there are things that work and things that don’t. The highlights of the evening include the pointe shoe dance, the aerial acts, the Viva Las Vegas number, and many of the group dance numbers. The women are sexy, vibrant, and show a lot of skill with their art. The show seems to falter a lot when the women open their mouths to speak, and when they attempt to do comedy...they are talented dancers, but they need a lot of work when it comes to speaking and acting. Another failure of the show is when the stereotypical French elements are brought out; they are so stereotypical and cliché that there is a collective eye-rolling from the audience that acknowledges the lack of creativity. This show could be great. The space is utilized well and the intimacy works in their favor. A lot more could be done with establishing personalities for the women and creating a stronger audience/performer relationship. Cools has made great strides in bringing this production to the Paris, and I hope that it is continually worked on and improved.