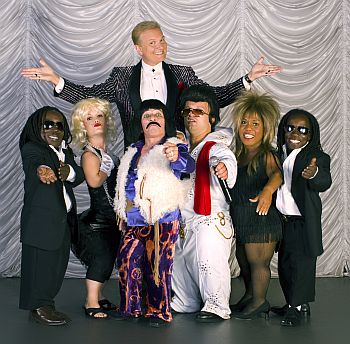 "Little Legends" is playing inside the Harmon Theatre at the Planet Hollywood Resort & Casino. It is a show of little people celebrity impersonators. We see the diminutive versions of Britney Spears, Madonna, Alanis Morissette, Michael Jackson, and more. The show includes a couple of dancers and is hosted by the incredible Jeff Hobson. The production quality of this show is pretty poor, and if these were people of a more standard stature, the show would not work at all. "Little Legends" is a kitschy show to say the least. It is really as if there are two shows going on. There is the one with the little people, and there is the one with Jeff Hobson...and I like the one with Jeff Hobson. Hobson is a very accomplished performer, and he is a joy to watch. His manner, style, and routine have been honed through years of effort and performing. Hobson is one of my favorite performers to watch. His comedy/magic routine is one of the best in the industry. He has the ability to keep his act fresh---no matter how many times I've seen it; he still makes me smile and laugh. Then there is the other show...it is a collection of fairly standard impressions, but only one of the four actually sings. The woman that performs the female characters has a decent voice and dresses appropriately. Two of the four dance well, and the last performer lip-syncs and does visual comedy. It is an uneven show that has a mish-mash of acts, which are all performed at a moderate level of ability. If these people were of normal stature, the show would not work. That being said, the appeal and the draw of this show is the fact that they are little people. Watching these little people perform is intriguing at first, but when that novelty wears off, we start to see the gaping holes in the production values of this show. The show seems to have been put together in a haphazard way. It seems as if little bits of this and little bits of that have been put into a sequence without paying attention to the production as a whole. What is the point? What is the bigger picture? What are they trying to achieve with this production? It would be nice if all of these acts built into something. Currently, the show is an amusement. Pieces of it might work as an act in a bigger production, but as a stand-alone show, it is lacking a lot of basic elements. The Harmon Theatre is still a multi-use space, and its appointments as a production house are a bit under par---it has come a long way in recent years, but there is still a lot of work to do. "Little Legends" has a long way to go in order to be a substantial piece of entertainment. It needs direction and purpose to raise it above the level of a mere amusement.