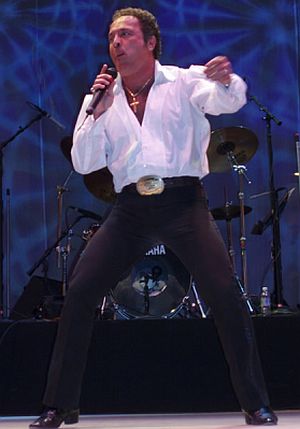 Harmik (as Tom Jones) is performing inside the new Canyon Club at the Four Queens. The singularly named performer has long been internationally recognized and praised as the #1 Tom Jones impersonator, look and sound alike in the world. He has established himself as a staple at corporate events, private functions, and full stage solo concert performances. The one thing that he had not been able to facilitate, though, had been a regular gig as a headliner in Las Vegas. His venture at the Canyon Club is a lot of fun, and one of the best entertainment bargains in the city. The show is very simple...it is Harmik, his band, and all of the hits of Tom Jones. As an impersonator and look-alike, Harmik pulls off an incredible Jones. There are times during the performance that you actually forget that youâ€™re not watching the real thing. The Canyon Club opened a few months ago and is working to establish themselves as the best and the brightest nightspot for bands and entertainment in the downtown corridor. Based on their club in Los Angeles, The Canyon, the restaurant/club is known for bringing in some of the greatest bands to an intimate setting. The venue in Las Vegas holds approximately 500 people in a comfortable and trendy atmosphere. The show features (of course) all of the songs that made Jones famous, as well as a few surprises. Watching the reactions of some of the women in the audience was like actually being at a Jones performance...many of them were manic, and the more manic they were, the more I enjoyed it. There was usually at least one woman dancing onstage with Harmik for every number. The band is comprised of all top-notch musicians. The musical director and keyboard player, Jay Boyer, leads the group. Jeff Borree plays drums, Donny Phillips plays guitar, Larry Wooley is on the bass, Brian Oâ€™Shea plays trombone, Alan DeVille plays trumpet, and Cash Farrar in on the saxophone. The show is set up so that you can have dinner before or during the show as well. The food comes off very well, and the rib-eye dinner special, along with the show, does make this a piece of bargain entertainment that is very rare in this city. The job of an impersonator is tough. It is even tougher when the real performer comes to town on a regular basis, but Harmik has achieved more than most other impersonators have ever hoped, and it has been based on a combination of the look, the sound, and the performance. I wish Harmik the best, and I hope that he achieves great success with this show.