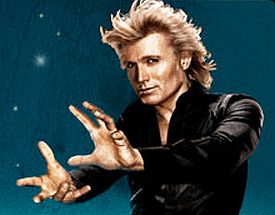 Hans Klok: The Beauty of Magic, featuring Pamela Anderson, is playing in the Theatre for the Performing Arts at the Planet Hollywood Resort & Casino. It is a highly hyped stage magic production that utilizes the talents of international magic notable Hans Klok, who has gained the titles of "world's fastest magician" and the "Dutch Copperfield." The show also includes a troupe of 14 dancers, over 40 illusions, and of course, Pamela Anderson. All of this is presented on the large stage at Planet Hollywood...the show has a lot of money behind it...but it seems as if most of this money has been badly spent. Stage magic is tough. It requires little or no skill to perform and relies heavily on the talents of the assistants and the stagehands. In order for it to work, the magician must have extraordinary charisma and presentation talents. David Copperfield is the standard by which all others are measured---not only for his charm, but also for his innovation. Hans may be called the "Dutch Copperfield," but he falls short in all of the areas that really seem to matter. About ten years ago, the bulk of the magic community had to change and re-invent itself due to the presentation of "Breaking the Magician's Code: Magic's Biggest Secrets Finally Revealed," presented by the "masked magician." When so many of the standard illusions were blown by this television presentation, magicians reacted with new and more interesting tricks. They had to change or fade away because people now knew how these tricks were being done...maybe they didn't air that show in Holland. All of the tricks that Hans performed are old. Not only have we seen them all before, we know how most of them are done, and beyond that he did variations of the Houdini Metamorphosis trick three times! We are not thrilled, and we are not amazed. The production's money should have been spent on new illusions. Hans spends most of his time running around in circles on the stage with his arms stretched out and doing his best to be dramatic...but there is a fine line between dramatic and cheesy...and he certainly crossed that line when he would pose at the front of the stage and unseen fans would blow his hair back. It was almost laughable. Sharing top billing with Hans is Pamela Anderson, brought in obviously to have a star name associated with the production, but her participation in this show turns out to be a mere footnote. Anderson doesn't make her first appearance until nearly an hour of the production has passed, and then she is only onstage for a few minutes at a time. It is sad. Everything about her presence on the stage says, "I'm only here for the money." She really doesn't look like she wants to be there. The best part about the show is the dancers. There are a lot of talented people that perform some terrific choreography. (There is a dance on top of cheese wheels that I question, but...) The dancers look good, dance great, and are the highlight of the show. I'm not sure what Planet Hollywood was thinking when they booked Hans Klok. Did they believe we had a shortage of magicians in this town? Did they think that the void left by Siegfried & Roy had to be filled? I don't know why Hans Klok was brought in, but I believe that it was a mistake...although...with the money that's behind the show, it will probably be here for a while.