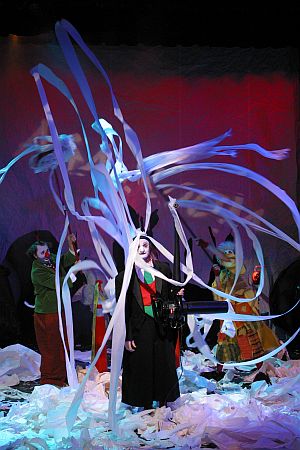 AGA-BOOM is playing inside the Steve Wyrick Theatre at the Miracle Mile Mall in the Planet Hollywood Resort & Casino. It is an explosion of unbridled silliness that truly delights a crowd of all ages. Three clowns, Dimitri Bogatirev, Iryna Ivanytska, and Valery Slemzin bring this production to life. Rooted in the distinctive style and universal language of clowning, this uproarious, interactive spectacle transforms the Steve Wyrick Theatre into a frenzied funhouse filled with sophisticated humor, outlandish chases and audience participation that erupts into the biggest paper fight to hit Miracle Mile at Planet Hollywood. Dimitri Bogatirev brings together the best traditions of circus arts and physical comedy into the unique theatrical event, AGA-BOOM (a spin-off of the Russian word for paper - "boomaga"). Together, the three world-renowned clowns, equipped with an arsenal of bizarre props and matchless talents, create a series of vivacious vignettes and interactive mayhem set against a towering punch-away paper wall. With a knack for mischief and the ability to make even the most ordinary tasks extraordinary, the ensemble turn laundry detergent bottles into movie cameras, substitute bags of garbage for beach balls, transform hundreds of toilet paper rolls into soaring streamers, and casts the entire audience as extras in the messiest grand finale ever. Setting a new standard for physical theater and changing the world’s perception of clowns, AGA-BOOM’s dialogue-free funny business and irresistible charm add up to a wonderfully wild show. The show may start off a bit slowly, and the musical accompaniment may be a bit thin and underwritten, but the payoff at the end of the show makes it all worthwhile. I was amazed...I was seated amongst kids from the age of 2 to the age of 16...and they were all mesmerized. None of them wanted it to end, and they all truly enjoyed themselves. As I looked around, it was apparent that the adults were having a good time as well. There was universal joy and pleasure. It really will be fun for the entire family. It is a 60-minute explosion of pure family fun, for children and adults alike is high energy, and nothing you have seen before. Aga-Boom had successful engagements on Broadway, Las Vegas, San Francisco, Boston, and Los Angeles. It was highly critically acclaimed from coast to coast. The show has thrilled and delighted audiences around the world, performing for more than 300,000 people in Japan, Mexico, Korea, Singapore and the United Arab Emirates. The show is here for the summer...so see it if you can.